What We Can and Can’t Know About Our Babies Before They are Born January 23, 2014 Ellen Painter Dollar

Daniel and I chose with each of our three pregnancies to find out whether we were having a boy or girl. With our second and third children, we also had amniocentesis done so we would know whether or not the babies inherited osteogenesis imperfecta (OI – my genetic brittle bone condition).  Both choices arose from my tendency to deflect stress by engaging in fully informed planning. I had no desire to stock up on mint green and yellow gender-neutral clothing just so I could be surprised on my child’s birthday. Welcoming an unknown human being into my life, for the rest of my life, provides plenty of surprise for one day. The amnios were an attempt to avoid the sickening uncertainty of not knowing for weeks after my child’s birth whether or not he or she had inherited OI—not knowing how careful we and others should be, not knowing whether a particularly fussy cry was due to colic or a broken bone, not knowing whether trips to the orthopedist and geneticist should be on the calendar. I knew that uncertainty well, having lived through it with my first child. It was awful. Whether our second and third babies had OI or not, I just needed to know what we were dealing with. 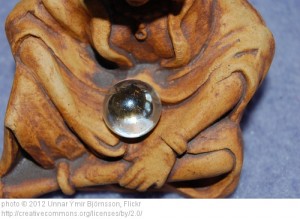 The knowledge we had about our babies before they were born was useful and empowering. It was also, of course, incomplete. Ultrasounds and genetic tests gave us discrete bits of information, about the presence of particular body parts, about an X or Y chromosome. These bits were significant, but they told us as much about the human beings I was gestating as a single scrap of cloth tells about the quilt into which it is sewn. We can know from the scrap that the quilt will have some blue in it, but we cannot know whether the quilt’s pattern will be geometric or organic, its palette riotous or serene. We cannot know how the quilt will figure in the lives of its owners—whether a child will prop a book and flashlight under it, reading far past bedtime, or a couple will sleep under it every night of a long marriage, or the dog will have puppies on it. The quilt becomes part of the human story, and tells its own stories, in ways that cannot possibly be known from that single scrap of blue cloth.

Likewise, parsing our potential babies’ genes to determine gender or a genetic condition is a ludicrous way to predict the future. When prenatal testing tells us that a child will be male or female, or that he or she has OI, Down syndrome, cystic fibrosis, dwarfism, deafness, hemophilia, or a significant chance of developing breast cancer or Alzheimer’s, we know only that a particular trait will be part of that child’s story. But we still know almost nothing about how that story—the whole story—will unfold.

In my experience, thoughtful parents engaged in prenatal decision making about using preimplantation genetic diagnosis (PGD) to screen for a genetic condition or responding to a prenatal diagnosis know that they are making a ludicrous leap. They understand that a diagnosis of Down syndrome or OI or dwarfism cannot predict the fullness of a human life. They know that, while a particular genetic condition will bring limitations and perhaps pain of different kinds, their child’s life will not be absolutely defined by the condition. But in many cases, they choose to screen for the condition or terminate the pregnancy anyway.

My husband and I chose to undergo PGD to try to have a child who would not inherit OI, as our first daughter did. We knew full well that a guarantee of strong bones was not a guarantee of anything else. We knew that whether our child had strong or fragile bones was no predictor of what sort of life he or she would live. We knew that our child could be subject to troubles and struggles other than OI. We knew that fact perhaps more intimately than many prospective parents do, because my husband’s family has a long history of depression, suicide, and addiction. We assume there is a genetic basis to this history. But unlike my history of OI, we have no idea on what chromosome or in what gene that legacy is hidden. So while we understood that OI was far from the only threat to our potential child’s well-being, because it was the only threat we could pinpoint, it was the only one we actively tried to prevent.

In using PGD to screen for OI, we understood that we could not control everything. But we could control this.

In having amniocentesis done in my second and third pregnancies (which occurred naturally, after one failed cycle of PGD), we understood that we could not know everything about our baby. But we could know this.

We live in a culture that offers this kind of compartmentalizing as an effective coping mechanism. Overwhelmed by your messy, cluttered house? Choose one thing that you can tackle, and start there. Paralyzed by all of the factors in your life that you cannot control? Think about what factors you can control, and focus your energy there. This is yet another way in which cultural norms and values heavily influence intimate reproductive decisions, even as some insist that these decisions are purely “personal.” I support autonomy in reproductive decision making, but it needs to be an informed autonomy. We have much work to do to uncover how deeply held cultural norms, values, and assumptions influence reproductive decisions, so that prospective parents can make truly informed choices.

January 22, 2014
An Op Ed Loaded with Oversimplifications about Abortion & Adoption
Next Post

Evangelicals, you have some denouncing to...
Grace-Colored Glasses
Related posts from Ellen Painter Dollar