News Flash: You Are Not Jesus!

Recently, several Christian writers I follow have made the point that we are not Jesus. Probably we Christians should have figured this out several thousand years ago, but apparently we are slow learners.

Here’s why this little bit of truth is so important, particularly in this era of rampant Internet trollery and culture wars and lots of folks getting fed up with a religion that claims to be centered on love and forgiveness but instead appears to be obsessed with judgment, division, and figuring out who is “in” and who is “out.” (And also, sex.)

When Christians decide that it is up to us to tell other people that they are sinful, we are overstepping our bounds. This is true even if we strive to “love the sinner, hate the sin,” and witness to what we believe is God’s truth in a gentle, loving way. (Is that even possible? I don’t think so. I think the minute we start telling other people that what they are doing is wrong in God’s eyes, we are separating from and elevating ourselves above them. Effective conversation 101 is that you use “I” statements when talking about someone else’s behavior, not “you” statements. You have every right to talk about how someone else’s behavior hurts you. But when you start making pronouncements about someone’s behavior that has nothing to do with you? That’s just trouble.)

But back to the Jesus thing. Christians think we have a right…a duty…to call other people’s sin out. Why? Because that’s what Jesus did! But we are not Jesus, are we?? We are supposed to follow Jesus, not be him. When we read scripture, we’re playing around with a massive superiority complex if we identify ourselves with Jesus. You know who we should identify ourselves with? The bumbling idiots and royal screw-ups, the sick people who need healing and the lost people who need finding. 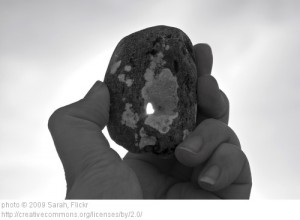 I’ve been pondering this idea thanks to several things I’ve read and watched recently, which I commend to you. First, there’s this video called Put Down the Stone, in which Glennon Melton talks about identifying with the folks ready to stone anyone who violates the rules that we see as inviolable. (Remember what Jesus said about throwing stones? Yeah.) Then there’s this terrific post by Laura Ortberg Turner specifically about the ways that Christians mistreat each other online, justifying name-calling if it’s done in the name of Jesus. Laura writes,

[T]here are some Christian people who get a kick out of being guardians of the faith, drawing doctrinal lines in the sand that leave them square in the middle of ecclesial correctness and exclude everyone else. And it may come from a sense of duty, from a love of getting a rise out of other people, or from a really sincere heart about the importance of orthodoxy–but it is doing immense damage.

This is not to say that Christians ought never speak out and work against injustice. Christians have a powerful history of working for justice and peace, which requires naming and working against sins such as slavery, oppression, and poverty. We also, of course, have a shameful history of failing to speak out against injustices, or even of actively supporting injustices, such as when Christians openly opposed abolition and desegregation. This shameful history is one reason that we ought to be careful about claiming that we are privy to and absolutely certain of God’s will.

But there are some differences between Christians naming corporate greed or sex trafficking or racism as sins, and then working toward justice for those sinned against, and Christians going around, online or in person, calling other believers sinners because of our positions on hot-button issues, such as homosexuality. Many of our fraught and impolite latter conversations are focused on determining who is in and who is out, who can be ordained or married or even who can bear the label “Christian” based on perceived sins. Jesus was never about creating that kind of division; he was always calling people back to community, back into the fold. Jesus’s instructions to his followers focused on good news and finding and inviting and feeding, not figuring out who can belong and who can’t. There are other differences, not least that there is a long Biblical precedent of corporate action and prophetic witness on behalf of the poor and oppressed, and not so much around the issues of sexuality and gender and reproduction that inspire modern Christians to say unkind things to and about one another. Finally, and perhaps most important, there is a difference in emphasis. Our job, as redeemed sinners beloved of God, is always to name that same belovedness in all people, to err on the side of invitation and inclusion. When we name the sin of racism, for example, we are calling people who exhibit racism to recognize and repent of sin. But we are also and fundamentally witnessing to God’s reckless love* for all of humanity. We are engaged in a positive witness built upon the wideness of God’s mercy. We are speaking out against sin, yes, but more important, we are speaking out for people to know that they are created by and beloved of a God who wants them to be free to flourish.

I don’t see that positive witness in so much of the vitriol spread in Jesus’s name these days. Mostly, I see meanness and exclusion, all in the name of defending orthodoxy by calling out the sins of others. But that’s not our job. We are not Jesus.

What do you think? I’m especially interested in further exploring the difference between Christians engaging in prophetic witness on behalf of the poor and oppressed (which requires naming other people’s, and our own, sin) and the kind of divisive naming of other people’s sin that has us doing Jesus’s job instead of our own. Are these two different things, or one and the same? Are both okay, or neither?

*Credit goes to my friend and pastor Curtis Farr for the phrase “reckless love,” which he used so eloquently in his sermon yesterday. Reckless is one of my favorite words, and I think this is the best use of it I’ve heard.