Why Do Parents Choose to Screen for Disabilities?

Why Do Parents Choose to Screen for Disabilities? February 17, 2014 Ellen Painter Dollar 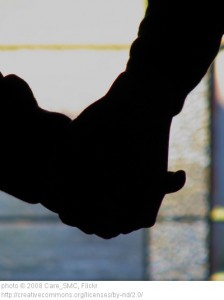 Imagine you are standing at an intersection with your child, waiting for a walk light so you can safely cross the street. The traffic light turns red, the “walk” sign lights up, you grab your child’s hand, and just as you are about to step off the curb, a mysterious voice from above says, “Stop! In 5 seconds, a car is going to run the red light. If you are in the crosswalk, your child will be hit and severely injured. She will be paralyzed from the waist down.” Setting aside the fact that hearing mysterious future-predicting voices isn’t exactly a normal experience, would you listen to the voice? Would you step back onto the sidewalk to protect your child from the certainty of a painful, life-altering injury? Most of us would say yes, of course we would.

So you step back onto the curb, thus ensuring that your child will not become a paraplegic (at least not today, not like this). By doing so, are you also sending the message that you don’t believe that paraplegics live valuable lives? Are you saying that paraplegia is a fate worse than death? Are you revealing an underlying belief that life with paraplegia is not worth living? Are you saying that paralyzed people are of questionable value, that humans with fully functional bodies deserve to live and those without fully functional bodies don’t?

Such questions are absurd. Of course we’re not saying or implying any of those things about people who are paraplegics. We are simply fulfilling our duty and instinct as parents by protecting our child from certain and significant harm.

This scenario is one of several thought experiments that bioethicist Janet Malek used to argue, in an April 2010 Journal of Medical Ethics article, that when parents use screening technologies such as preimplantation genetic diagnosis (PGD) and prenatal testing to avoid having a child with a genetic disorder, that does not imply a devaluing of people living with such disorders. Malek concluded that, “The choice to avoid creating a life with disability may reflect a negative view of the disability itself, but not of persons who have it.”

Malek’s argument is a convincing one, although her argument does not do away with all ethical objections to PGD and prenatal testing, as she readily admits in the article. I was recently discussing Malek’s conclusions on a comment thread; the other commenter noted that in the thought experiment, we’re talking about protecting an existing child from harm, whereas with PGD, we’re choosing among fertilized eggs to determine which will have a chance at life, based on whether or not they have a particular genetic mutation or chromosome. Protecting a potential child from a disorder by terminating an embryonic life is quite a different thing than protecting an actual child from impending harm. There are many other ethical questions raised by PGD and prenatal testing that Malek’s argument fails to answer. Nonetheless, her conclusion is an important one, especially when it comes to how we understand parents’ decisions to use screening technologies.

One concern with PGD and prenatal testing that comes up frequently is whether we are allowing parents to “commodify” their children. Are we encouraging parents to see their children as products that meet their preferences, rather than gifts to be received as they are? Do these technologies tempt parents to believe they can control what kind of child they get, rather than helping them experience the power of parental love that embraces whatever child they get, no matter how different or surprising that child may be?

After listening to many, many parents’ stories and considering my own, I have concluded that most parents use screening technology not out of some misplaced desire for control, but out of love. Most parents have a sincere desire to protect their child from harm and suffering. This is a primary reason that I don’t reject screening for genetic disorders on ethical grounds (even as I have many ethical concerns about it) but do reject screening for gender: Screening for gender (except when screening for a sex-linked genetic disorder) is motivated primarily and almost exclusively by parental desire for a particular kind of child. Screening for genetic disorders may also be (almost certainly is) motivated to some extent by parental desires for the kind of child they hope for and expect. But it is also motivated by love, by a primal desire to protect our children from pain. Malek’s thought experiment speaks to parental intent, which is a vital, if hard to gauge, component of reproductive decision making. When we dismiss parental intent, when we insist that screening technologies are merely stepping stones to “designer babies” and indicators of self-absorbed, perfectionistic, closed-minded parents, we fail to honor all the ways that parents facing difficult reproductive decisions are simply trying to do what most parents see as a primary job—protect their babies.

The conversation can’t end there, of course. We can honor parents’ impulse toward protection and care. And we also have a duty to help parents explore what they are protecting their children from, and why. The parental impulse to protect children from suffering is genuine and deserving of our respect. But that impulse can be misplaced, informed by centuries of cultural biases and assumptions about what kind of life people with genetic disorders can and do lead. Many conditions are widely assumed to lead directly to tragic, pain-filled lives. Meanwhile, families living with those conditions testify to lives that are, yes, difficult, sometimes terribly so. But not so tragic. Not filled with wall-to-wall suffering. Often filled with many joys.

Let’s first acknowledge parents’ fierce impulse toward protection and care, accepting parental intentions at face value rather than assuming they are designer-baby-seeking control freaks. This opens the way for exploring—and gently questioning—parents’ assumptions about the pain and suffering their child will experience if born with a genetic disorder.

February 14, 2014
On Valentine's Day, Love (Not Romance) is What Matters
Next Post