When a Viral Blog Post Doesn’t Change Much of Anything

We here at Patheos are celebrating the site’s fifth anniversary today. In honor of the occasion, we’ve been asked to reflect on one of our top posts or some other high point of blogging for Patheos.

I always thought that having a viral blog post—a post that spirals out and out and out, reaching tens of thousands of people—would catapult me into the upper echelons where real bloggers live. The bloggers who can be assured that nearly everything they post will get plastered all over people’s Facebook news feeds, and who have agents and editors e-mailing them, saying, “So, do you have any book ideas?” Bloggers like, say, Glennon Melton, whose viral blog post “Don’t Carpe Diem” led ultimately to her first book being bid on by something like eight New York publishing houses.

I wrote my post “Why I am a Christian Democrat” (to date, shared more than 44,000 times on Facebook) after a night when I got only a couple of hours of sleep, and when I had a sick kid home from school. My friend Marlena Graves had let me know a few days earlier that her husband, Shawn Graves, a philosophy professor at the conservative Cedarville University, was getting blasted by fellow Christians for co-writing an article on why he wouldn’t vote for Mitt Romney for president.  (Cedarville has since abolished their philosophy department as part of a fundamentalist takeover of the university. Shawn Graves now teaches at the University of Findlay.) Knowing that I am a Christian who usually votes Democrat, Marlena suggested that I write something explaining how my Christianity informs my political leanings. So on that Tuesday morning, exhausted and while lounging on the couch next to my sick child, that’s what I did.

For the first few days, the post chugged along as my other posts do, getting shared here and there, attracting a few comments each day. On Friday morning (three days after the post was published), when I checked my email on my phone, I was surprised to see that a few dozen comments had come in overnight. And then, every time I refreshed my email inbox, I received notification of yet another comment (or two or three). Over the weekend, reading incoming comments (and deleting the ones that were full of misinformation or just nasty) became a full-time job. I had my first (and to date, only) viral blog post. 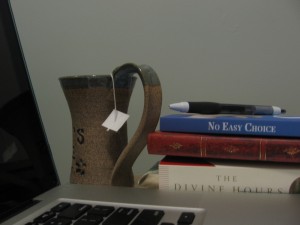 And guess what? It didn’t really change anything. I still don’t have agents and publishers knocking down my doors. I still get fewer than five comments on most of my blog posts. “Why I am a Christian Democrat” still brings in a fair amount of traffic; it is almost always one of the most popular posts on my blog. But otherwise, my writing life today is very much the same as it was back in October 2012. I write here a few times a week. I guest post for friends’ and colleagues’ blogs. Without a solid idea for another book, I’m focusing on getting articles and blog posts published by print and online magazines, including the Christian Century and Sojourners.

The pressure on nonfiction writers to build a “platform,” by producing lots of writing and promoting it heavily via social media, is enormous. And it’s exhausting. I’m in an online writers group of women writers. Many of us have kids at home, ranging from infants to college-bound teenagers. We’ve been talking lately about the pressure to be “on” all the time, to consistently produce top-quality content and then market it to death, so that we can prove to potential publishers that really, people want to read what we write! Pinky swear! We’ve been talking about how hard that is, both from a writing standpoint (producing good writing takes time) and from a life standpoint (we feel torn between the online world, where we are writers trying to prove our worth, and our family lives, where we have little people—and laundry, groceries, pets, spouses— who need our full attention).

Blogging regularly for Patheos has made me a better writer, and a better known one. I’ve realized, though, that to produce decent quality work, my focus can’t be on platform. My goal can’t be to write another viral blog post, and another , and another. My goal must simply be to do what I love. To write well, on topics I care about. I came away from the recent Festival of Faith and Writing with a single phrase: Do the work. Being a writer is primarily about writing—not about following some social media guru’s five-step system for getting the most attention for each blog post, or about keywords and SEO.  I am a writer, not a social media audience attractor. I have to trust that if I work hard to produce decent writing, it will reach a steadily widening audience, and usually not at viral blog post pace. One of my colleagues recently wrote to our writing group, “I think writing gets hard for me when I lose sight of why I’m writing. It gets hard if I start writing only for ‘platform’ because that’s not who I am–and I don’t think that’s who any of you are, either.”

Ultimately, it wasn’t the 600-plus comments or the 75K-plus Facebook “likes” that made me proud of writing my “Christian Democrat” post (although those were fun to see). On Election Day 2012, I got an email from a woman who said she attended a church where she got the message loud and clear that being a Christian means voting Republican. She wanted to vote for Obama, for many of the same reasons that I outlined in my post. But she was unsure, given her church culture, if that would be okay. A Google search brought her to my post, which helped convince her that she could vote Democrat without jeopardizing her Christian faith. She went to the polls and cast her vote. When I learn that something I wrote gave someone confidence in their own opinion, or helped them articulate something they have been thinking about, or when something I wrote helps me articulate something—that, plus a simple love of writing, is what keeps me coming back to the keyboard. Not the short-lived (if temporarily thrilling) high of a viral blog post.