After 25 Years of the ADA, What Disabled People Most Want (Hint: It’s Not More Ramps)

After 25 Years of the ADA, What Disabled People Most Want (Hint: It’s Not More Ramps) July 27, 2015 Ellen Painter Dollar

Yesterday marked 25 years since President George H.W. Bush signed the Americans with Disabilities Act (ADA) into law. Articles, blog posts, and Facebook statuses celebrated the landmark legislation, pointing out where progress has been made and where work still needs to be done. I was particularly moved by two things I came across yesterday. The first was a New York Times op ed by Ben Mattlin, who uses a wheelchair due to spinal muscular atrophy. Mattlin ponders the ADA’s successes, writing:

Looking back, perhaps the most unexpected achievement of the A.D.A. isn’t the wheelchair lifts on buses or the sign-language interpreters at political conventions. It’s that it gave people like me a sense of entitlement, of belonging, of pride.

The A.D.A. is about more than ramps and Braille; it’s about dispelling stereotypes, ensuring parity and fairness, creating opportunities and opening up our society to the full spectrum of types and needs. It’s about accepting, even welcoming, a huge and often marginalized segment of the population.

Throughout his essay, Mattlin refers to a wedding portrait of him and his wife, explaining that they keep it out where visitors can see it to dispel their assumption that his wife is not his wife but his aide, or their tendency to address his wife but not him. Their wedding portrait, in other words, serves to remind visitors that in the most essential ways, his life is defined not by his disability but by the same essential things that mark all human lives; his life revolves around those he loves and those who love him. When his daughters remark that on their school’s Diversity Day, “there was nothing about respect or empowerment or equality” for people with disabilities, Mattlin responds:

Maybe I’ll bring my wedding portrait to the next Diversity Day. Whether we knew it or not at the time, our brand of mixed marriage sends a powerful message.

The second especially powerful piece I came across on the ADA’s 25th anniversary was a video produced by a Cincinnati news station about my friend Kara Ayers, who has osteogenesis imperfecta (OI) as I do. Kara and her husband Adam (who also has OI) have two children—a biological daughter, Hannah, who does not have a disability, and a son, Eli, whom they adopted from China and who has a form of dwarfism. The 13-minute long video tells the story of their traveling to China to get Eli, and it’s worth taking the time to watch in its entirety (the link above takes  you to an article; scroll down to get to the video). The video ends on a sober note, as Kara points out that in their state of Ohio, the law states that a child can be removed from his or her parents’ custody due to a physical disability, substance abuse, or psychological disability—with no due process or additional evidence of abuse or neglect required. 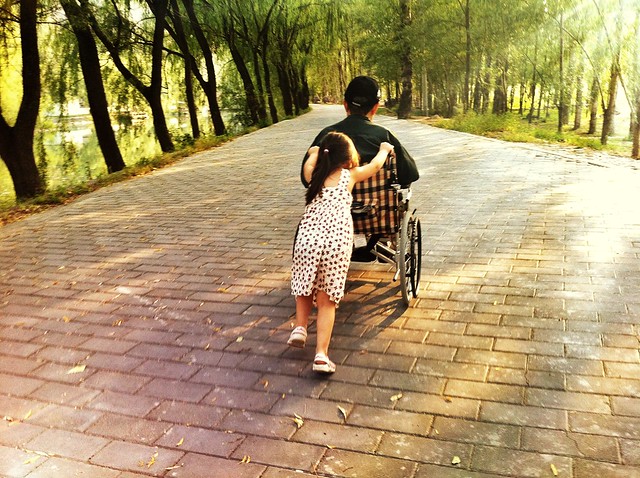 Since yesterday, I’ve been thinking about the powerful message that Ben Mattlin’s wedding portrait sends—and why that message is still so necessary. I’ve been thinking about the Ayers family’s remarkable story—and the misinformation and prejudice that still leads individuals and governments to believe that a disability can, by definition, render someone unfit to be a parent. I’m thinking about the stories I’ve heard and told here, in my book, and in my speaking engagements about expectant parents receiving prenatal diagnoses of genetic disorders followed immediately by the question, “So, shall we arrange for you to terminate?” I’m thinking about online commenters who have read my story, of having three biological children who each had a 50 percent chance of inheriting OI from me, and who have said that knowingly bearing a child with such a high chance of inheriting a disability is unacceptable, immoral, monstrous.

Most of us, when we think of the ADA and what is required for people with disabilities to be treated with respect and dignity, think initially of ramps and automatic doors. If we have children in school, we may think of accommodations (governed by a different law) made for children with disabilities. And all of that is important, vital.

But what I most want as a person with a disability isn’t more ramps.

I want a world in which people don’t assume that a disabled person’s spouse is his aide, or is better able to articulate his needs than he is.

I want families in which a parent has a disability to live without fear that their children will be taken away.

I want people to understand that while the reality of passing on a genetic disorder to one’s child can indeed be painful, that child is so much more than her diagnosis.

I want parents whose baby is prenatally diagnosed with a genetic disorder to receive comprehensive information, including the chance to talk to families who are living—and thriving—with the same condition.

I want to go to the grocery store without being subjected to stares or intrusive questions.

I want disabled people to no longer be dehumanized by being primarily defined either as burdens or as inspirations.

Twenty-five years after passage of the ADA, we still need better access and accommodations. Major barriers, for example, remain in disabled people’s access to quality healthcare; many doctor’s offices don’t have exam tables that can accommodate wheelchair users, and many disabled young people don’t get adequate gynecological and reproductive health care. I’m flabbergasted by how many institutions still fail to provide basic accommodations allowing people with disabilities to access them. Last month, I attended a conference on, of all things, justice and equality, and discovered that the “accessible” first-floor dorm room I had requested so that I wouldn’t have to navigate stairs with my walking stick and my suitcase actually required me to first go down one flight of steps and then go up another to get to it. A fellow conference participant who uses a wheelchair reported that when he arrived at the hotel where he had reserved an accessible room, he discovered that he could choose between a room with an accessible bathroom and a room with an accessible bed area. He chose the bathroom and slept on the floor.

There’s still much work to do as far as access and accommodation. But what disabled people most want, in addition to more ramps and all the other accommodations that allow us equal access, is to be seen and understood quite simply as human beings, whose lives are defined most significantly not by what we can’t do or what we need, but by the essential human activities, emotions, and ideals that define all human lives: Work and play. Family and friends. The celebration of big milestones. The drive toward new knowledge and experiences. The comforts of home. The sustaining power of love.

July 23, 2015
Seven Favorite Posts on Disability, in Honor of the ADA's 25th Anniversary
Next Post

July 29, 2015 It's Complicated: A Pro-Choice Christian Responds to the Planned Parenthood Scandal
Recent Comments
0 | Leave a Comment
Browse Our Archives
get the latest from
Ellen Painter Dollar
Sign up for our newsletter
POPULAR AT PATHEOS Progressive Christian
1