“I, Kuttamuwa, servant of [the king] Panamuwa, am the one who oversaw the production of this stele for myself while still living. I placed it in an eternal chamber and established a feast at this chamber: a bull for [the god] Hadad, a ram for [the god] Shamash and a ram for my soul that is in this stele. 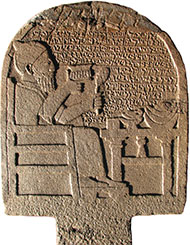 That’s the inscription on a stele unearthed this summer in South-Eastern Turkey, and newly deciphered (University of Chicago Press release). According to the excavator-in-chief, it’s the earliest known written evidence for the belief in the existence of a soul:

“Normally, in the Semitic cultures, the soul of a person, their vital essence, adheres to the bones of the deceased,” said David Schloen, an archaeologist at the university’s Oriental Institute and director of the excavations. “But here we have a culture that believed the soul is not in the corpse but has been transferred to the mortuary stone.” (NY Times)

Now, strictly speaking what we are talking about here is not simply belief in a soul that continues after death. After all, that is a belief that is widespread, notably of course in Ancient Egypt, with its penchant for mummification. And the Neanderthal burials at the Shanidar Cave in Israel seem to show some kind of belief in an afterlife.

But what’s unusual about this one is that body seems to have been cremated. For many religions – including relatively modern ones like Christianity – the body and the soul are intimately linked, so that destruction of the body implies destruction of the soul. No such concerns seem to have troubled Kuttamuwa, who seems to have been pretty confident of a fruitful (and well fed) existence even after having been burned to a cinder.

November 23, 2008 Sick women don't go to church
Recent Comments
0 | Leave a Comment
Browse Our Archives
get the latest from
Nonreligious
Sign up for our newsletter
POPULAR AT PATHEOS Nonreligious
1