Creationism in the Islamic World 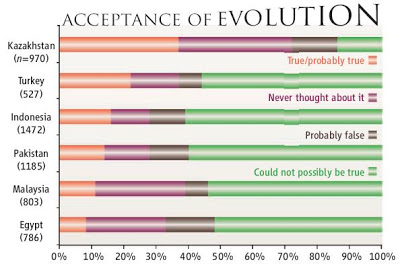 Salman Hameed, an Astronomer at Hampshire College, Massachusetts who also runs a blog on Science & Religion, has an article in this week’s Science Magazine on attitudes to creationism in the Islamic World. The article is well worth reading, as are the other links on his related blog post. It deals not only with attempts to reconcile (or otherwise) Islam with evolution, but also on the woeful state of science teaching in many Islamic countries.

I wanted to pull out just one bit to focus on, and that’s a 2006 survey of belief in evolution across a range of predominantly Muslim countries. As you might expect from this group of poor, mostly highly religious countries, acceptance of evolution is very low.

But look at Kazakhstan! It’s a middle income nation of about the same per capita wealth as Turkey (and poorer than Malaysia) but substantially higher acceptance of the science. The factor that marks Khazakstan out from the other countries surveyed is, of course, its Soviet past.

In other words, most people in Kazakstan grew up under the influence of alternative world view (Communism). This to me is evidence that modernisation, wealth, communication or investment in teaching is not enough if you want to wean people away from evidence-free thinking. You need also to provide an alternative perspective that allows people to diminish religion.

In the West, this was provided by the Enlightenment, which paved the way for modernity. However, the Islamic world is faced with the problem that ‘modernity’ is associated with foreign domination and a colonial past, which makes it easy for a reactionary religious figures to portray modernizers as somehow betraying their countries’ values. In an interview with the New Scientist, Salman says:

In some instances, evolution becomes a symbol for Western dominance and a sign of modernity. Evolution can act as a lighting rod, as a symbol of the West and everything that is bad about the West – usually translated as material culture or materialism.

In his Science article, Salman argues that progress can be made within the Islamic world view, and cautions that:

…efforts that link evolution with atheism will cut short the dialogue, and a vast majority of Muslims will reject evolution.

Well perhaps. But the example of Kazakhstan, with its history of Communist-inspired atheism, suggests otherwise. Maybe what Islamic countries need more than anything is a hefty dose of atheism – enough to trigger a paradigm shift to enable them to break free of the stranglehold of religious conservatism.