Trouble in the Ark

Trouble in the Ark December 4, 2008 Epiphenom 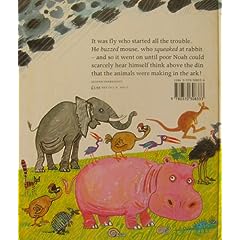 Does using myths to teach kids amount to religious education? From Down Under comes this story of a man who’s withdrawn his kids from a school that’s using the Noah’s Ark myth to teach 5-year-olds about animal noises.

Mr Williams complained that his daughter, Kathleen, now 5, was asked to make the “sizeable” replica of Noah’s Ark during her prep class at Gabbinbar State School, “despite the fact that Queensland Education bans prep children from taking part in religious education programs in state schools”.

Mr Williams said the Ark replica was later pinned to the classroom wall, and the teacher showed his daughter a DVD “with a Genesis theme and a book about Noah’s Ark”.

The school denies the claim, saying the children were shown a video of Evan Almighty — a comedy about a man who builds a replica of Noah’s Ark — and a book about the Ark as part of a unit of study on animals and the noises they make.

Now, Evan Almighty is strong on Christian propaganda. Trouble in the Ark (pictured above) seems pretty innocuous though, and seems like a good choice for teaching kids about animal noises. In a sane world, it shouldn’t be a problem to use myths (Christian or other) as part of teaching kids about the world around them.

Australia, however, has gone slightly crazy under the influence of the previous government – the Liberal Party, who were in power from 1996-2007.

Mr Williams’s complaint said Christian groups had been emboldened in their efforts to “spread the word” in state schools by a Howard government program, launched in October last year, to fund chaplains in state schools.

Under the $90million School Chaplaincy Program, schools can apply for up to $20,000 a year to employ a chaplain to mentor students.

An evangelical group called Scripture Union has placed 500 chaplains in Queensland state schools in the past year, including 40 per cent of primary schools and 80 per cent of high schools.

It sounds like an absolutely horrendous state of affairs, and enough to make you very sensitive to the schools use of religious themes in teaching!

December 1, 2008
Is Britain really lonelier than ever?
Next Post