How does religion prevent suicide?

Religious people are less likely to commit suicide. This is pretty much established as fact; the big question is how the effect is mediated. Is it that the spiritual beliefs of religious people help resolve existential anxieties, gives them hope for the future, or perhaps even fear of punishment in the hereafter? Or is it that religion provides a framework for mutual support that helps people through tough times?

There’s a new study from a Canadian team that sheds some light on this question. They used data from a massive survey of over 35,000 Canadians (the Canadian Community Health Survey) to take a look at some of the factors associated with thinking about suicide (suicide ideation) or even attempting suicide. It was a nationally representative sample – around two-thirds were spiritual and slightly more were religious – and around half were both religious and spiritual. Religious people were those who went to church (for reasons other than weddings or funerals) at least once a year.

What they found was that people who were either spiritual or attended religious services (or both) were significantly less likely to have attempted suicide. But the problem is that spiritual and religious people are different to atheists. For example, women are more likely to be spiritual, and also more likely to attempt suicide.

So they took this into account in their statistical analysis. Importantly (and uniquely, as far as I know), they also took account of differences in social supports. Religious people might simply have better access to information, more friends, and more emotional support. So their analysis takes this into account too, to try to provide an estimate of the ‘pure’ effects of spirituality and religion.

What they found was that, taking demographic factors and social support into account, spirituality no longer had any significant effect. Religion, however, did. A top-line interpretation of this is that spirituality doesn’t offer any particular help above and beyond what can (in theory at least) be provided by other means. But religion seems to. That’s certainly how the Christian Post sees it:

According to the data, the former category [spirituality] did not show a decreased inclination to take their lives, suggesting something more was involved that was related to the actual attendance at a religious event occurring in a church, mosque, temple or other spiritual gathering.

But I think there’s something else going on here. Looking at the data closely, what it looks like to me is that spirituality is linked to fewer suicide attempts, even after accounting for demography and social support – it’s just that their model become so statistically weak that it can’t show this. And the data also seem to show that religious attendance reduces suicide despite being associated with less social support. 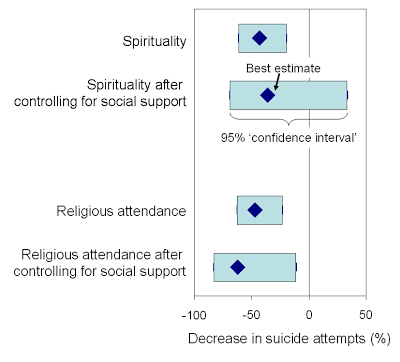 The explanation for this is a little bit complicated, but here goes! You’ll need to refer to the graph on the right. The blue diamonds show the point estimate – the best guess from the statistical model. The light blue boxes show the 95% confidence intervals. They’re an indication of how uncertain the point estimate is.

In short: if the 95% confidence interval crosses the ‘zero’ line, you can’t be confident that what you’re testing (spirituality, for example) has any effect – no matter where the point estimate lies.

You can see what’s happening with spirituality. Once you expand the model to include demographics and social support, the 95% confidence interval balloons. Although the best estimate for the effect does go down a little (from a 43% reduction to a 37% reduction in attempted suicides), the main reason they don’t find any effect is that the more complex model simply doesn’t have the power to detect anything but a massive effect.

It’s not that the effect goes away if we add demographics and social support – it’s more that adding these factors makes the model so weak that we simply can’t tell if there’s any effect.

Look at the situation with religion, by comparison. Although the confidence interval increases, it’s not by nearly so much. And the point estimate also goes down – from a 47% reduction to a massive 62% reduction in the risk of attempted suicide.

In other words, what this model seems to be showing is that religious people get less social support. And how do they define social support?

Now, it’s impossible to be sure about this without digging into the original data. I’ve contacted the authors, and will update this if they get back.

There are some other caveats here. First, this was a study on suicide ideation and suicide attempts, not completed suicides. Complete suicides have a very different epidemiology (they are more frequent among men than women, for example. So the conclusions of this study might not hold for actual suicides.

Second, over 40% of Canadians go to religious services less than once a year. That’s quite low by global (although not UK) standards. In poorer countries, non-spiritual people are more likely to attend religious services – so the results might not hold elsewhere.

Bearing all that in mind, here’s what I conclude from this study. First, spirituality might help reduce suicide attempts, but if it does the effect is small after accounting for other relevant factors.

Second, religion probably does help stop people going down the path towards suicide, but it does it in spite of seemingly reducing other forms of social support.