Planned Parenthood is disgusting? What does that even mean?

Planned Parenthood is disgusting? What does that even mean? November 29, 2015 Epiphenom

Whatever the ins and outs behind the tragic shootings at Planned Parenthood clinic in Colorado, it seems safe to assume that the heated and inflammatory rhetoric that has characterised the debate around abortion in the USA has played a major role.

A couple of weeks ago, Planned Parenthood innocently asked Twitter users for one word to describe them. The torrent of abuse that resulted was voluminous and perhaps predictable, but what interests me is that one of the first and most retweeted responses was one that labelled them ‘DISGUSTING’.

If you think about it, it’s a bit weird. You might expect a feeling of anger if someone does something you don’t like, but disgust?

Disgust is usually reserved for things like disease and hygiene, and fears of contamination. But in fact disgust is also a very common response to moral outrages. P

revious research has shown that, strangely enough, physical cleanliness seems to have a real link to morality – simply wiping your hands can get rid of the feeling of moral disgust. What’s more, simply breaking a religious taboo can induce feelings of disgust (if you want to know more, see Is the God Delusion more disgusting than the Koran?).

A team of researchers that I’ve reported on several times before on this blog are back with a new study that helps explain exactly why people find religious transgressions disgusting.

What they did was to hook their Christian subjects up to a device that could measure tiny movements in facial muscles that are typically activated to show disgust (the levator labii, which dilates the nostrils and curl the upper lip). Then they showed their  subjects a number of true and false factual statements and also religious ones of various flavours (e.g. “Jesus is the light and the way” and “God does not exist”).

What they found was that, as other studies have shown,  ‘false’ religious statements induced feelings of both anger and disgust, and that disgust was an independent predictor of how morally outraged people were. Not only that, but people who reported feeling disgusted also reported feeling literally contaminated.

But the odd thing was that this wasn’t reflected in their facial expressions. They said they were disgusted, but they didn’t look disgusted or recoil in disgust. They did, however, look angry (their levator labii, responsible for the ‘knitted eyebrow’ look, was activated)

What these results suggest is that the disgust experienced by religious people in response to moral transgressions is real and is different from simple anger because it’s linked to genuine feelings of contamination. But it is not directly related to physical disgust.

In other words, it seems that when people reach for the word ‘disgust’ in this context, they’re using it as a metaphor to describe mental contamination. People who are disgusted feel that their minds have been corrupted by what they’ve seen – which is, perhaps, why they sometimes react so violently. 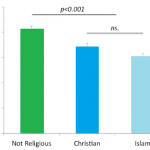 November 10, 2015
Kids in atheist families are more altruistic! The study is sound, but what does it mean?
Next Post 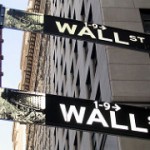