Is The God Delusion more disgusting than the Koran?

Is The God Delusion more disgusting than the Koran? September 6, 2011 Epiphenom

Ever wondered why we get disgusted by things that taste bad and also by things that are morally outrageous? Well, it seems that they really are connected in a very deep way – moral disgust seems to have evolved as an extension of physical disgust.

And that means you can play a neat trick: you can measure moral disgust indirectly by looking to see how it affects our physical sense of disgust.

Ryan Ritter and Jesse Lee Preston at the University of Illinois have been doing just that. The basic set up was to get students to taste-test a drink as part of what supposed to be part of a marketing survey. They tasted two drinks – although of course they were actually the same drink (made up of 1 cup of lemon juice in 1 gallon of water – rated as ‘moderately disgusting’!).

Oh, and did I tell you that they specially recruited only Christian students? 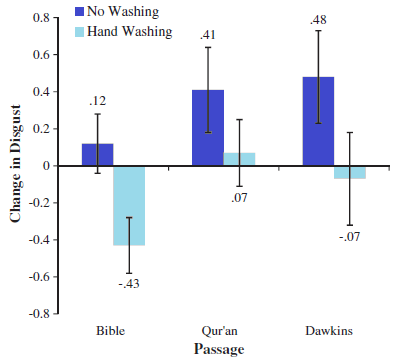 On the second taste test, the students that had to copy a passage from the Koran or The God Delusion rated the beverage as significantly more disgusting (even though it was identical). Their moral disgust at having to write out this stuff translated into physical disgust.

Both the Koran and The God Delusion are equally disgusting to Christians, by this measure at least.

In another twist, Ritter and Preston got their students to do another marketing test – after copying out the passages but before the second taste test. This time, they had to rate some handwipes – you know, those moist, antiseptic wipes that come in a plastic packet.

Half of them had to rate the wipes by just looking at the packet, but half were asked to actually wipe their hands.

This ties in nicely with some earlier research showing that hand washing seems to link cleanliness with morality. Cleanliness really is next to godliness!

September 2, 2011
Are educated people really just as religious?
Next Post