Religion seems to undermine property rights and the rule of law

One of the arguments given for religion is that it is supposed to promote social cohesion by making people behave better – God, so the theory goes, acts like an invisible policeman living inside your head. It’s an intriguing, and intuitive theory, and it’s backed up by a few lab experiments.

Real-world evidence, however, has always been harder to find.

One example of this was a study I blogged about in 2009, on the link between atheism and trust. Niclas Berggren (The Research Institute of Industrial Economics, Stockholm, Sweden) and Christian Bjørnskov (Aarhus University, Denmark), showed that countries with more atheists actually show higher levels of trust.

Well, now they’re back with another study, this time looking at property rights and the rule of law. These are pretty nebulous concepts, but they analyse them in microscopic detail. They looked at both what was enshrined in the national constitution – the fundamental, law-given rights – as well as actual practice. Actual practice was measured as ‘property rights’ as assessed by the right-wing US think tank The Heritage Foundation (who are pretty fruit-loopy on the subject of climate change, so I never thought I’d end up citing them!), and the World Bank’s World Governance Indicators, which is a measure of the quality of institutions protecting property rights. 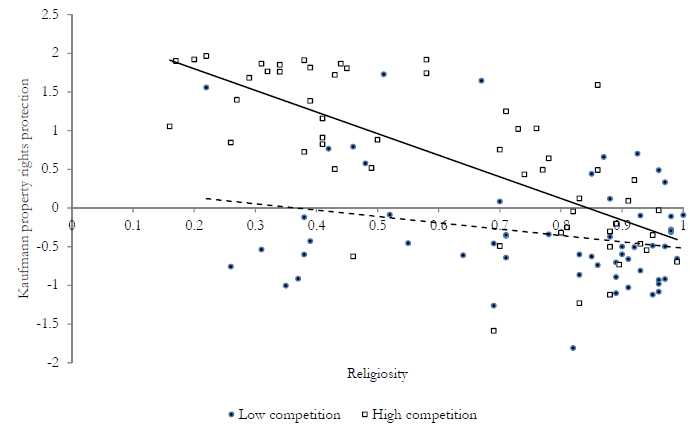 The headline result was that the actual property rights prevalent in a country were lower the more religious the citizens of that country were. They controlled for a whole bunch of factors – too many to list, but including stuff like the dominant religion, level of trust, Scandinavian countries, and post-communist countries. Even so, the relationship still held.

Critically, the relationship was much stronger in more democratic countries. In other words, when citizens have freedom of expression and the right to vote, then atheism is linked to better property rights and stronger legal protections.

Now, you’re probably wondering about the whole ‘direction of causality’ thing,but they looked at that too. They used a statistical technique that involves substituting religious beliefs for a surrogate measure (they used ‘confidence in religious institutions’ and ‘Nordic countries’). The relationship still held, which suggests that religion really does undermine property rights.

But here’s the strange thing. The relationship for constitutionally-enshrined rights was exactly opposite. More religious countries had more and stronger constitutional provisions intended to protect property rights.

Why should this be? Well, they offer a couple of potential reasons. Firstly, they say, “In some political cultures, formal rules are, by general consent or through the actions of political elites, ignored; in other places, they are seen as symbolic, malleable and open to interpretation“. Secondly, they point out that constitutions are often written in the distant past – they may not reflect actual practice in the modern-day country.

What ever the reason, their data show that religious countries were in theory more law abiding (if you looked at their constitution), but in practice were actually less law-abiding!

September 6, 2011
Is The God Delusion more disgusting than the Koran?
Next Post