Revenge is not so sweet

Revenge is not so sweet January 14, 2009 Epiphenom 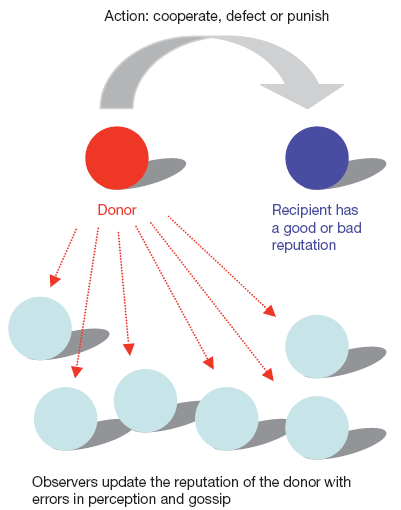 What to to do if someone you know behaves badly? Turn the other cheek, or take your revenge? According to Martin Nowak’s latest game-theory based analysis, turning the cheek is the strategy that’s most likely to reward you in the long run.

Nowak (Professor of Biology and of Mathematics at Harvard University) is interested in something called the repeated prisoner’s dilemma, a popular model of social interactions. In the game, you’re paired up with another person and have a choice of either co-operating (in which case your partner benefits but you don’t) or defecting (in which case you benefit but your partner loses). The payouts in the game are set such that it’s best if you both co-operate, but there is a strong incentive for you as an individual to cheat – if you can get away with it!

In a study published in early 2008, Nowak and colleagues looked at what happened if you were also allowed to punish defectors – this is so-called ‘costly punishment’, which costs you a bit but inflicts a greater cost on your victim. Now, you might think that strategies in which you can punish cheaters can bring them back into line, and so increase your payout.

In fact, that wasn’t what happened. They showed that people who were quicker to use punishment tended to lose out overall, and that the best results were achieved by people who responded to defectors simply by defecting themselves (i.e. refusing to co-operate).

In reality, life is a little more complicated than this simple two-way interaction. We’ve evolved to live in groups, and most of our interactions are with people who we’ve watched in action, and so we’ve formed an opinion of what they’re like. Reputation is important.

In a new paper, Nowak looks at whether the reputation you earn can make punishment a more effective strategy. This time they used a mathematical model to explore all the options, rather than real people.

To make the simulation realistic, they also assumed that the watchers could make mistakes about your reputation, and also that they talked to each other (they gossip!).

What they found was that if the watchers were poor in assessing your reputation, then defection was the best strategy (you might as well defect, since the watchers are pretty clueless). If they were good at it, then you should co-operate with good people and defect with bad.

But there were hardly any circumstances in which you benefit from being in a group that believes in punishing those who are bad. 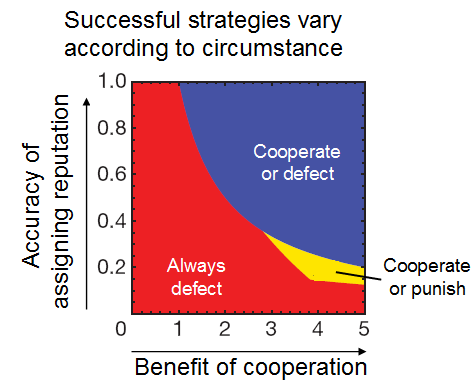 You can get a flavour for what this means in practice from this figure, which shows how varying two of the parameters affects the best strategy.

There’s only a very small patch (‘cooperate or punish’) when punishing those who are bad is the best strategy. It occurs when assigning reputation is pretty inaccurate, and the benefits of co-operation are very high.

Tweaking other parameters changes this landscape somewhat, but the general picture is always the same – there’s only a small window where ‘cooperate or punish’ is a good strategy.

So why did punishment as a strategy ever evolve? Well, this is a model, not reality. The agents are simple, and the model assumes that everyone has the same attitudes to crime and punishment.

But perhaps the reason that punishment is popular is not that it increases overall good, but that it brings fewer negative effects to the punisher than to everyone else. For example, punishment could evolve if it is a way of establishing social dominance. Nowak explains in his 2008 paper:

In other words, the winners in costly punishment games don’t do well – they simply do less badly than everyone else.

January 16, 2009 Faith healers sabotage vaccination efforts
Recent Comments
3 Comments | Leave a Comment
Browse Our Archives
get the latest from
Nonreligious
Sign up for our newsletter
POPULAR AT PATHEOS Nonreligious
1