Religion and health: the big meta-analysis shows it’s about attending, not believing 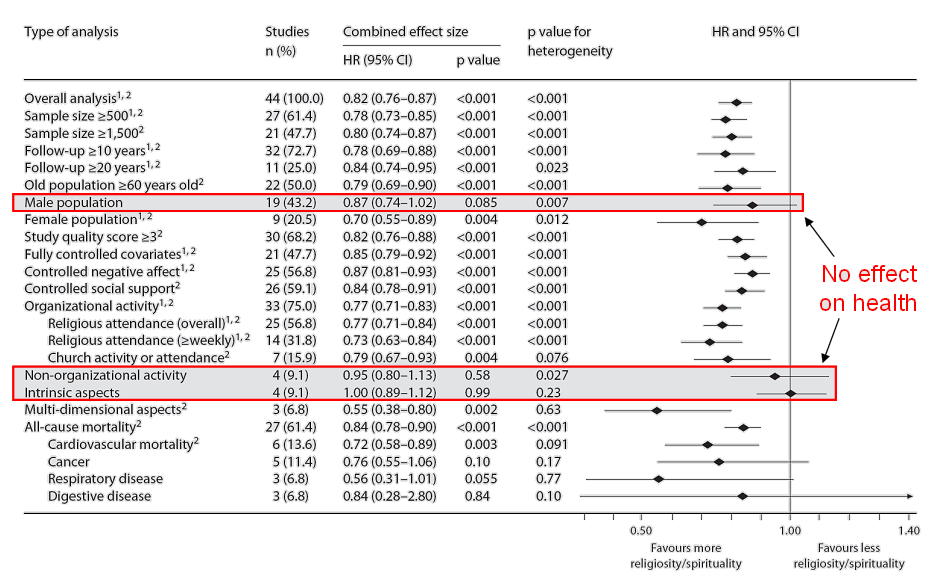 A couple of epidemiologists from University College London have published a meta-analysis* of nearly 60 studies into the relationship between religion and health.

Their aim was to give a definitive statement not only whether religious people have better health, but to get some precision on what types of religiousness are important.

The figure shows the results from prospective studies (i.e. ones where they measure religiosity, and then some time down the road they measured health) in originally healthy people. The spot indicates their best estimate, and the lines the ‘confidence interval’. Basically, if the horizontal line crosses the vertical one, then that particular factor probably has no effect on health.

There’s a lot of stuff in there about study design and other factors, but I’ve picked out the important ones – three factors that do not connect religion and health.

In other words, there seems to be a real health effect for women, at least, from participating in group religious activities. According to their analysis, this effect holds even after you control for happiness, strength of social networks, and unhealthy behaviour.

However, in people who are already sick, there is no benefit from any kind of religion. You die just as quick!

The results give some hard, objective numbers to the conclusions that have been made before (see earlier post). These really do seem like consistent, strong findings. Now the only question that needs answering is what’s driving them!

March 22, 2009
The unfeasable common sense of creationism
Next Post