What’s the connection between religion and homophobia?

And what about racism? Are religious people more likely to be rascist? And if not, why not? This is an important question because religion acts to strengthen group cohesion, and it also comes with a lot of moral rules. Either of these could explain the link to homophobia. But most religions tend to be at least overtly anti-racist. So if religious people are more racist, this is probably because the ‘group cohesion’ effect overrides the ‘moral censure’ effect.

Sometimes it seems like you wait years for big studies to come along tackling these issues, and then two come along at once! Putting both of them together starts to put some really interesting meat on the bones of this very fundamental question (with the caveat that, like most research in religion, these studies were done in the USA/Canada)

First up (and hat tip to The Phrenologists Notebook for this one) is some research done by Wade Rowatt and colleagues from Baylor University in the States. They crunched data fro the 2007 Baylor religion survey, which was a nationwide survey of over 1500 adults in the USA (that’s the same survey that they use to say that atheism is not increasing). Unsurprisingly, religious people were more likely to be homophobic – in fact, religion was one of the strongest predictors of attitudes to homosexuals. 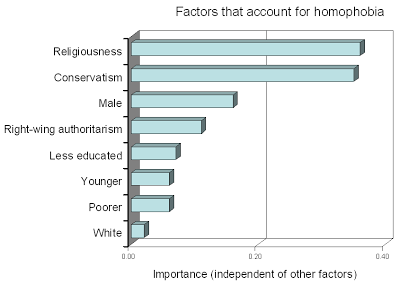 The next study took a more detailed look at different kinds of religiosity, and how they relate to prejudice towards homosexuals and blacks. The author, Bernard Whitely at Ball State University in Indiana, used a statistical technique known as meta-analysis to pool together the results of a large number (61, in fact) of previous studies. This gives it enormous power to get under the skin of what’s really going on.

The results showed a much more nuanced picture than any previous study.

Fundamentalism (the belief that there is one set of religious teachings that clearly contain the essential, inerrant truth) was linked both to greater homophobia and racism. So fundamentalist religion generates group cohesion that’s sufficiently powerful to overcome the non-racist message of conventional Christianity.

Christian orthodoxy and intrinsic orientation were linked to more homophobia and less racism. In other words, these people do as they’re told! (Intrinsic orientation reflects the extent to which people truly believe their religions’ teachings and try to live their lives according to them.)

On the other hand, extrinsic orientation (which reflects the extent to which people use religion as a means to achieve nonreligious goals) had no effect on homophobia, but was linked to racism. The ‘group cohesion’ part of religion was strong in these kinds of people.

Finally, Quest orientation – people who score highly on this view religion as a search for answers to questions about the meaning of life. They were less homophobic and and also less racist.

Now, these categories are not mutually exclusive. Most religious people will belong to several to some degree or another. But what seems to be the general conclusion from all this is that the rabble-rousing, church-going aspects of religion are the ones chiefly responsible for both homophobia and racism. And they are counterbalanced to some extent by the quieter, more introspective aspects of religion.

So religion is both Jekyll and Hyde. I guess that’s not too surprising, but it’s nice to have some hard science to back it up!

March 9, 2009 Religion makes people in poor countries (but not rich ones) happier
Recent Comments
0 | Leave a Comment
Browse Our Archives
Follow Us!