Why women are more religious. Part 3: Social factors (or: What would Jessica do?)

Here’s an evolutionary ‘Just so’ story from Elisabeth Cornwell, an Assistant Professor at the University of Colorado, published just last month on a, ahem, popular women’s website:

Why do women today continue to fall victim to an archaic system of beliefs that foster misogynistic behavior? Why are women even more likely to be religious than men? The simple answer is that it is safe. Please don’t take this as a slight against women – it isn’t. Male/female differences exist, but I’m certainly not suggesting that risk taking is a better option than playing it safe. After all, women are less likely than men to die doing incredibly stupid things (check out the Darwin Awards it is nearly exclusively male ‘winners’). But the fact that women are less likely to push the status quo for fear of social exclusion and even retribution makes a lot of evolutionary sense.

Now, as discussed in the previous post, it seems like there is actually no link between attitudes to risk and religiosity. In fact it seems like Cornwell is falling prey to the temptation of ‘minimisation of mystery’ – here are two mysterious things (risk aversion and religiousness), let’s explain one by the other!

But I’m not going to beat on Cornwell’s article (Sandwalk has already done that). I’m going to take a look at what I think is Cornwell’s deeper idea – that women are attracted to religion because it provides a secure support network. And the best data for that come from a 2006 paper by Donald Sullins, a sociologist of religion (and ordained priest) at the Catholic University of America.

His paper takes a really close look at two sources of survey data that are used a lot in social studies of religion: the General Social Survey in the USA, and the World Values Survey. Sullins wrings the data till it squeaks – there are so many different cuts and analyses that it’s difficult to pull out broad theme. But what the hell, I’m going to try!

Sullins basically takes two difference tacks. Firstly, he questions whether men and women really differ in religiosity, and if so how. Then he takes a look at whether social factors or personality differences can explain the gap. 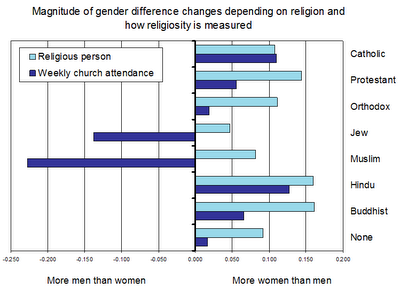 He breaks down religion into two components ‘affective’ (i.e. the importance of religion, frequency of prayer, etc) and active (i.e. going to church, volunteering). You might think that the social side would be more important to women, and so that might be where the biggest gender gap lies. However, when Sullins looked at the data he found that the opposite was true – the gap between men and women on religiousness is bigger than the gap in church attendance.

In fact, for some religions the gender gap is turned on its head. In Judaism and Islam, men are more likely to attend church than women! What this suggests is that patriarchal religions are more attractive to men (unsurprisingly) and, more importantly, that social factors and not just biology can influence the gender gap.

But there’s more to it than this.

The second surprise comes in the relationship between reported religiousness and reported church going. Remember that these are survey data we’re talking about. An unfortunate flaw with such data is that people tend to tell you what they want to believe about themselves, rather than the reality. This is a particular problem for subjective questions like ‘How important is religion to you’, and less so for objective questions (Church attendance, for example).

Sullins did uncover some evidence (using GSS data) that this is actually happening. Both men and women report higher levels of ‘importance of religion’ (on a 6-point scale) than church attendance (on a similar 6-point scale). What’s more, as you move along the ‘importance of religion’ scale, the bias towards higher church attendance goes up for men and down for women.

Bottom line: the gender gap is biggest for self-reported religiosity, rather than attendance, and only really exists at low levels of attendance. Could it be that women who don’t go to church still tell people they are religious simply because that is what is expected of them? It’s a distinct possibility, based on these data.

Perhaps this is too cynical. And anyway, it still seems likely that there is a real gender difference that needs explaining. So Sullins next takes the GSS gender differences at face value, and looks at how can they be explained.

Here are the potential factors that he looks at:

When all these factors are bundled in, gender differences in church attendance completely disappear, differences in prayer frequency drop by two thirds (compared with a model that only looked at demographic factors), and differences in the most problematic measure, self-reported religiousness, drop by 40%.

What factors were most important? Well, the personality factors were about as important as structural, social, and network factors put together. Fear had a small effect on affective religion, but not on attendance. In other words, a small part of the reason that women pray more often is that they have greater fears for their personal security.

But the most important single factor was the number of friends you have that are in a congregation. This is the social factor shining through. For both men and women, what your friends do has a powerful influence on what you do and how you think. It seems that one important reason that men are less religious is simply that they have fewer religious friends. Religion, in the USA at least, is a female thing.

Of the personality factors, being tender-feeling and soft-hearted were significant (not independence or self esteem). But this still begs the question: do these differences reflect nature or nurture? And what about the residual, unexplained differences? Are there any other factors that could help explain the gender gap in religion?

Well, yes there are. I was hoping to cover them in this post, but I’ve waffled on for longer than I intended! And also the tantalising cliff-hanger about a possible link with superstition. That will have to wait for the next (and really really final) post.