Purity and supersense unites Christians but divides liberals from conservatives

Jon Haidt, a research psychologist at the University of Virginia, reckons that he’s put his finger on the root of differences in moral attitudes between liberals and conservatives in the US.

Buried in the data (although Haidt doesn’t pick up on it) there’s a little nugget to be teased out about the differences between believers and non believers, which is this: Christians really differ from non-religionists in just one facet of morality (purity/sanctity).

The purity moral factor is a strange one, but it’s closely related to what Bruce Hood calls Supersense.

So, from the beginning. According to Haidt, morality can be divided into five factors, but liberals only care about two of them:

In every sample we’ve looked at, in the United States, in other Western countries, and even among our Latin American and Eastern Asian respondents, we find that people who self-identify as liberals endorse moral values and statements related to the two individualizing foundations primarily, whereas self-described conservatives endorse values and statements related to all five foundations. It seems that the moral domain encompasses more for conservatives—it’s not just about Gilligan’s care and Kohlberg’s justice. It’s also about Durkheim’s issues of loyalty to the group, respect for authority, and sacredness. 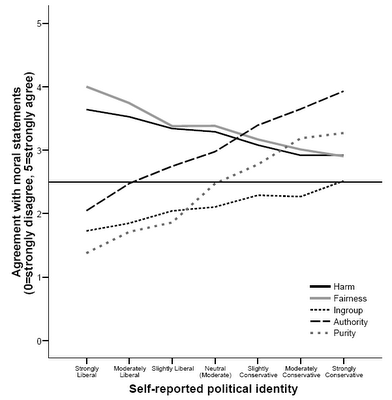 Here’s a example of what he found in one internet-based study conducted at Project Implicit. He asked participants whether they agreed with statements relating to the five factors.

You can see that as you move across the political spectrum from liberal to conservative, people become less willing to endorse value avoiding harm and being fair, and more willing to endorse ingroup loyalty, authority, and purity.

Now, to my mind this doesn’t really support Haidt’s conclusions. Far from conservatives endorsing all five factors of morality, there seems to be a trade-off. 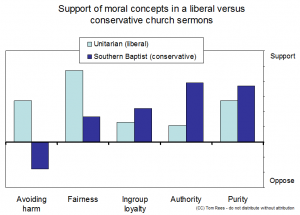 But where it gets really interesting was in a study of Church sermons. They did a word-analysis of sermons from liberal and conservative churches, and found a similar pattern.

The results were broadly similar to the general population – conservatives valued fairness less and actually dismiss the importance of avoiding harm.

But, based on the results in the general population you’d expect a big difference in purity, whereas in fact the two are pretty similar.

Which means that the differences seen in the general population are due to the non-religionists. They have fewer hangups about purity.

Now, this aspect of morality is essentially a superstition (a la Supersense). So this study holds out the prospect that weaning people away from Churches might actually decrease this type of superstition (or at least the hold it has on the political scene).