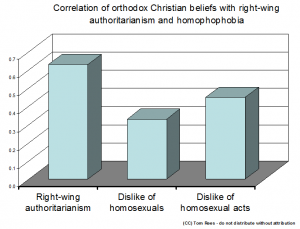 Here’s a new study which claims that religion actually reduces homophobia. Huh? That’s a pretty daring conclusion – especially given that there were two studies earlier this year that found just the opposite (What’s the connection between religion and homophobia?).

Here’s what the study authors conclude:

…endorsement of orthodox Christian beliefs was related to positive attitudes toward
homosexuals as individuals or as a group, but not toward homosexuality as a behavior or lifestyle.

But in fact that’s not quite what the study showed. In fact, orthodox Christian beliefs were highly correlated with both kinds of homophobia. But the Christians who were homophobic also tended to be right-wing authoritarians. It’s only when you statistically manipulate the data to strip out this effect that you see a positive effect of Christianity.

In other words, what this study shows is that Christian beliefs might reduce homophobia, if it weren’t for the fact that so many Christians are right-wing authoritarians. It’s a bit like arguing that Christians don’t really support torture, it’s just that many of them happen to be neo-fascists!

But if Christianity bolsters right-wing authoritarian views, then spreading Christianity will increase homophobia.

And it’s more complicated even than that. This study measured religion by giving the subjects a test on orthodox Christian beliefs. In other words, people who scored highly were fairly sophisticated Christians – quite untypical of the common herd.

One of the studies published earlier this year took a look at the link between religion in general and homophobia. It found that, even after adjusting for right-wing authoritarianism, there was still a connection to religiosity.

The take home from all this? I guess it’s that the relationship between religion and homophobia is complex and can work both ways. But attributing the link to authoritarianism is not explaining it. It’s ‘explaining it away.

May 2, 2009
Two new research networks devoted to atheism and secularism
Next Post