Real gods are stranger than fiction – for adults at least 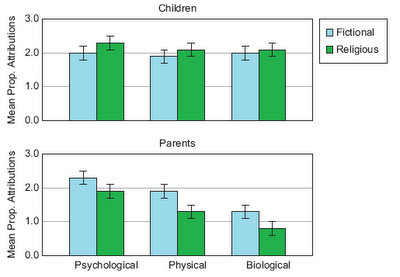 The striking thing about supernatural creatures – gods, demons, goblins and the like – is just how very like humans they are. Very often, they will have only one or two magical features, but their other characteristics are decidedly anthropomorphic.

Question is: does this reveal something about the way our minds work? Are there limits to what we can invent?

Cognitive psychologist Pascal Boyer, in his classic book Religion Explained, suggested that supernatural beings are just weird enough to be special, but not so weird as to be difficult to remember or identify with. They are, in his words, minimally counter-intuitive.

Now, clearly many gods break this rule – the Christian concept of trinity is probably as counter-intuitive as it is possible to get. But what subsequent research has shown is that popular concepts of gods conform quite closely to the minimally counter-intuitive model – they are much more anthropomorphic than are theologically correct concepts.

A recent study by Andrew Shtulman has challenged this idea by comparing religious beings (e.g. God, angels) with ones that look similar but are popularly believed to be fictional (e.g. fairies, ghosts).

One of the things he did was to ask children and their parents whether these beings had a variety of anthropomorphic properties. The figure above shows what they found.

In the kids’ minds, both fictional and religious beings were both equally anthropomorphic. Not only did they think like humans (e.g. they could be happy or sad), but they also had physical attributes (e.g. they could be located either inside or outside) and also had biological needs (they got hungry, for example).

The curious thing is that, when it came to describing religious beings, parents gave only half as many physical and biological attributes as did their children. In other words, adults were more likely to think of these entities as disembodied minds.

What this suggests is that you don’t need to think about gods as abstract, non-anthropomorphic beings to start believing in them. But if you are going to maintain that belief, then you have to shift your ideas in that direction.

What’s more, it shows that beliefs about God aren’t fixed in childhood, as some people suppose. In order to retain their beliefs, people adapt them as they mature.

And finally, this does rather suggest that maybe we do have a natural predilection to imagine gods in an anthropomorphic way. Don’t forget, even adults listed on average one physical and one biological attribute to God and angels. Maybe the gods adults believe in are not minimally counter-intuitive, but it seems they are not totally counter-intuitive!

There’s just something intrinsically appealing about a the idea of a person with superhuman powers!

May 9, 2009
More on Biologos: the morality god-of-the-gaps
Next Post