Here’s another one for the ‘It’s about attendance, not belief’ files. It turns out that strong religious beliefs do not reduce infidelity, although regular churchgoers are more faithful. The study was published last year, but it’s new to me at least (thanks to Brian Cleary for bringing it to my attention).

What the investigators (David Atkins and Deborah Kessel from Fuller Theological Seminary in California) did was to analyse data from the 1998 General Social Survey of the USA. 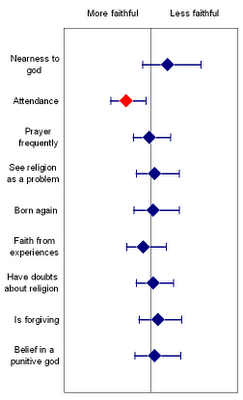 The survey is massive – 3,000 questions – including 37 on different aspects of religion. They grouped these into 9 categories, and analysed them together with other factors that influence infidelity – age, gender, income, and marital happiness.

Now, there are some caveats that need to be applied here. This was self-reported infidelity, something that people are likely to under-report, and attendance, which is often over-reported. And it’s a cross-sectional analysis, like most of these sorts of things, so cause-and-effect are open to question.

But it seems that religious attendance is associated with less infidelity. The authors put this down to the likelihood that couples that go to church together are more likely to stay together, for a number of reasons.

However, I wonder whether regular church goers are simply more conscientious and family oriented than other religious people. That’s why they go to church. For non-religious people, I suspect you would find a similar thing for those people who commit to secular activities.

There’s another interesting fact that they found. It turns out that there’s an interaction with marital happiness. Now, people who are not too happy with their marriage are, unsurprisingly, much more likely to have affairs. However, it’s here that the effect of attendance is biggest.

In other words, church going seems to be effective in keeping people stuck in unhappy marriages.

July 14, 2009
Prayer reduces stress - but no more than self-motivation
Next Post