How normal is WEIRD?

It’s a shocking fact, but pretty much everything we think we know about human behaviour derives from studies of US undergraduates – the psychologists’ ‘lab rat’! These people are WEIRD (Western, Educated, Industrialized, Rich, and Democratic) in more ways than one.

A paper from three psychologists at the University of British Columbia lays out in stark detail just how unusual the WEIRDs are, at least from a global perspective. First off, some stats to give you an idea of just how big the problem is. Of studies published in the top psychology journals:

Interestingly, this doesn’t simply represent the US lead in science overall. Psychology is simply a much more popular (or well funded) subject in the USA. Whereas 70% of psychology studies come from the USA, only 37% of chemistry studies do.

Does this matter? It sure does!

When studies have been done of people outside the narrow group of WEIRDs, the results are often surprising – and conflict with some cherished theories about evolutionary psychology.

Take, for example, two games that are frequently used to try to understand how people share and co-operate – the Dictator Game and the Ultimatum Game. Studies done in the West have shown that people don’t behave rationally in these games – they’re more generous than they should be, and willing to take a hit in order to punish offenders. 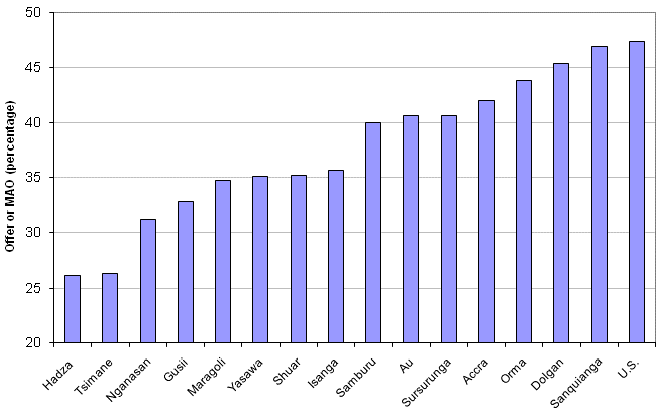 Cue all sorts of theories about how we’ve evolved to operate in groups and, ‘for the good of the group’ are intuitively more trusting than hard rationality would predict.

But when you do these studies in people living in small-scale societies (foragers, subsistence farmers, and the like), you find that the US is a glaring outlier.

The figure shows how much people offer in the Dictator Game. Both players are totally anonymous strangers. The idea is that you need to offer as little as you think you can get away with without making the other player go off in a huff. In the USA, most players offer rather a lot – nearly 50% of what they have. But in small-scale societies, where dealings with strangers are rare, it tends to be much lower.

What these results suggest is that the pro-sociality shown by US undergraduates is not a consequence of evolution at all. Instead, it’s something they learn, as a tool to help them exist in a complex society where you frequently have to interact with strangers.

So what do all these revelations mean for the psychology of religion? A couple of things, I think.

Firstly, the Dictator Game and the Ultimatum Game are standard tools to test the effects of religion. The idea is that religion – specifically the idea that a supernatural being is watching you – has an important effect in making people more honest.

So, for example, back in 2007 a study showed that religious priming did indeed increase the pro-sociality of Canadian students (whether or not they were religious themselves). But there was no effect in non-students (often older people). This suggests that the students were still learning the rule book for living in their complex world, and that’s why religious priming worked.

And the second thing to consider (and this is something that I always wonder about when reading about studies on religion done in the USA) is that the USA is not typical even among Western industrialized nations.

The US is much more religious than other similar countries, and atheists are far more distrusted. What this means is that, in the US, being religious is a badge that shows you are normal and want to fit in. That you are prosocial, in other words.

September 8, 2009
A prayer a day to make you grateful
Next Post