The inheritance of religion

The inheritance of religion October 28, 2009 Epiphenom

An earlier post looked at the connection in the USA between religion and a high teen pregnancy rate. High fertility and religion often goes together, and whenever this topic comes up the immediate question is: will the religious inexorably ‘out-breed’ the nonreligious?

The answer to that rather depends on how religion (or lack of it) is transmitted through the generations. Luckily enough, there’s just been a very nice study on this by Vern Bengston, Professor of Sociology at the University of Southern California.

Bengston and colleagues analysed data from the Longitudinal Study of Generations, which has been following over 3000 Californians for over 30 years. They now have over 4 generations in their database.

But what about religious beliefs? In each survey, they asked people how religoius they were (on a 1-4 scale), and also a number of questions related to how traditional/literal their religious views were. 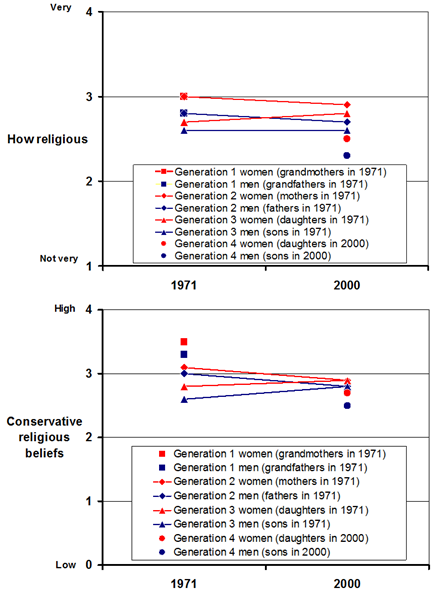 The results are shown in the first figure. The symbols on the left represent the various generations in 1971, and on the right the generations in 2000. Lines connect generations that appear in both surveys.

On the whole, people who were surveyed both times haven’t changed much. Mothers and fathers in 1971 are less religious in 2000, and daughters (but less so sons) are more religious.

Now, they don’t give any information on how many children the religious participants had compared with the non-religious, but it’s probably safe to assume that they had more.

So, with each generation, the religious have more offspring. And yet their numbers decrease!

This paradox is, of course, easily explained. Although there is a small genetic component that predisposes to agnosticism and atheism, they are in fact social phenomena. Irreligion is not inherited. It’s learned.

Religion, even conservative religion, is not a gene to be inherited. It’s a meme to be transmitted.

The study had another tidbit of information, and that’s about how much influence grandparents have over their grandchildren’s religiosity. The answer: not a lot. 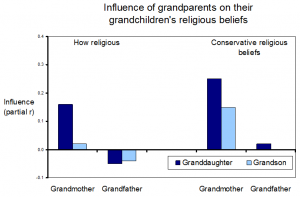 In 2000, grandmothers had a little bit of influence over the religion of their granddaughters. That was particularly true for conservative religious beliefs.

What’s surprising is how this has changed from 1971. I haven’t done a graph for these data, but basically in 1971 grandparents influenced their grandchildren’s church attendance, but less so their beliefs – and they had absolutely no effect over their conservative religious beliefs.

In other words the role of grandparents in transmitting religion has changed completely in the past 30 years – more evidence that the nature of religion in society is changing.

But there’s a bigger message here, and that’s the magnitude of the influence. Even when it comes to grandmothers and their granddaughter’s religiousness, the strongest link, the effect is very weak.