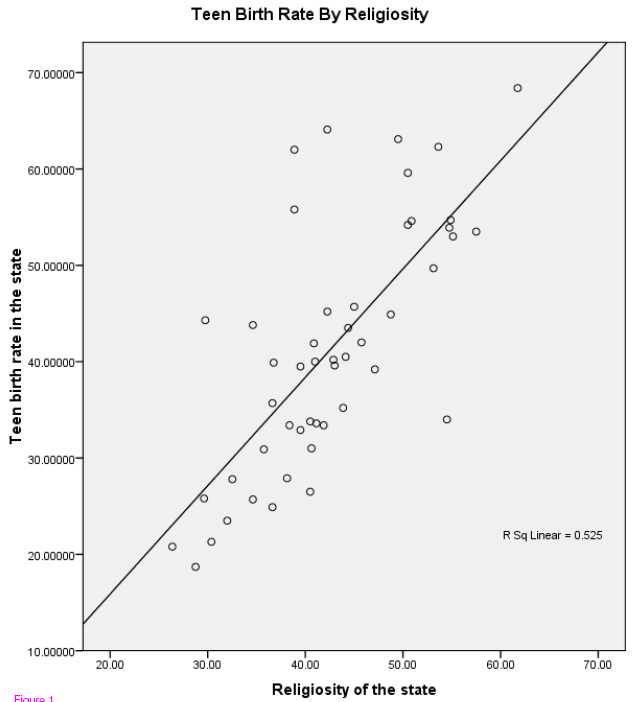 Here’s a study that Razib over at Gene Expression picked up on last month. Basically, it’s a very simple regression of religiosity versus teen births in US states.

Importantly, it’s an ecological study. That means it’s not looking necessarily at whether religious teens get pregnant more often. It’s looking at whether states with a lot of religious people also have a disproportionate level of teen births.

At a policy level, that’s the interaction that’s actually more useful because it includes the unintended consequences (like reduced access to contraception, changed attitudes towards female roles, etc).

Anyway, the correlation is dramatic. States with a highest numbers of religious people have three times the teen birth rate.

What could be the cause of this? Well, there could be confounding factors. The researchers did adjust for differences in income and abortion rates between states, and that did not have much effect. Razib points out that religious states also have a high proportion of blacks. No doubt there are other systematic differences that could account for the relationship, at least in statistical terms.

But this correlation is very strong, and it does fit in with other evidence that religion can encourage high fertility. Conservative protestants not only have more children, they have them earlier. The social expectations for young women are different.

And it seems to be the beliefs themselves that are important, rather than social aspects of religion. The average level of religious service attendance was not a strong predictor of teen birth rate. The strongest predictor was beliefs – especially beliefs that scripture should be taken literally and that prayers are likely to be answered.

That’s not to say that Protestantism necessarily leads to a high birth rate. New research shows that, in Switzerland at the turn of the 18th/19th century, it was Protestants who had low birth rates, and Catholics who had high birth rates. The author, Anne-Françoise Praz (University of Geneva) explains that, in the Catholic canton she studied:

…the religious discourse supported the husband’s rights to frequent sexual intercourse and encouraged him to trust Providence to bring up many children, thus sustaining high levels of fertility. The political repression of public discourse on sexuality defeated every attempt of contesting the husband’s marital rights and the Catholic doctrine of procreation. Sexual taboos were particularly severe for women and their total ignorance of sexual matters weakened their bargaining power in fertility decisions.

There clear parallels here with conservative protestantism in the USA. Either Protestantism or Catholicism can cause problems – what matters is whether the religion is conservative (i.e. traditional) or not.

So what’s all this got to do with a Malthusian time bomb? Well, population levels are determined not just by fertility rate (number of children per adult) but also by generation time.

Conservative religious groups not only have more children per adult, but they churn out the generations faster. The two effects combine to generate a population explosion (maladaptive, in the case of the modern world).

October 25, 2009 The doctors who hasten death
Recent Comments
0 | Leave a Comment
Browse Our Archives
get the latest from
Nonreligious
Sign up for our newsletter
POPULAR AT PATHEOS Nonreligious
1