When people stop believing in God… they go mental? 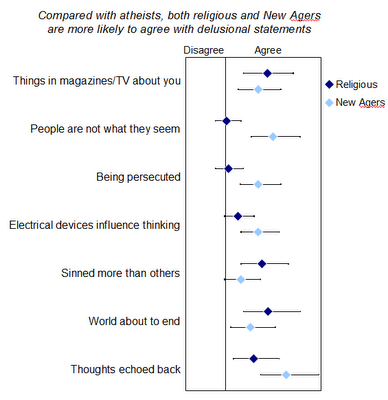 Probably the most famous thing that GK Chesterton never said was that:

When people stop believing in God, they don’t believe in nothing – they believe in anything.

Even if he never did say those words, the quote clearly strikes a chord with a lot of people. The meme has legs.

But is it true? A lot of people these days are moving away from traditional religions into various kinds of ‘New Age’ beliefs. Are they really more delusional than the religious – and how do they compare to atheists, for that matter.

This new study comes from Queensland, Australia. They’ve been following a bunch of kids since they were born in the early 80s. They were 21 years old at the last assessment – which is where these data are from.

The good news for atheists is that they scored lower for delusional beliefs than either the religious or the New Agers.

The graph up top is not particularly easy to understand! So let me talk you through it. What it shows is the relative probability (compared to atheists) of agreeing with a delusional statement for the religious and the New Agers. The probabilities are more interesting than the raw data because they are adjusted for demographic differences between the two groups (including drug use).

There were 21 statements in the test – I’ve pulled out all the ones where the religious were significantly worse than the atheists, plus a few more that were interesting.

Overall, the New Agers were more delusional than the Religious. That was particularly true for belief in witchcraft and telepathy (not shown in the graph). But the New Agers were also more likely to think that people are not what they seem, that they are being persecuted, that electrical devices like computers can control their thoughts, and that their thoughts are ‘echoed back’.

But the religious, while scoring lower overall than the New Agers (although still worse than the atheists) have their own delusions. It’s probably not surprising, given the nature of their religious upbringing (an even mix of Catholics and Protestants, with a smattering of other religions), that they’re more likely to believe in an imminent apocalypse and also that they are wretched sinners. Neither of these strike me as particularly healthy beliefs.

What to make of all this? Well, this is yet another cross-sectional study, so causality is hard to pin down. Some of the differences in beliefs (apocalypse, sinning, telepathy, witches) might well be a result of the different teachings.

In other words, if you drop out of organised religion but are suitably delusional, then then you might well switch to a belief in witches or telepathy.

But there probably is also some self selection going on. Religion struggles to be mainstream. If you’re too wacky, you may find it hard to fit in – and so end up as part of the ‘New Age’. But if you’re not wacky enough, you simply transition to atheism.

But what about the two delusions shared by the religious and New Agers? ‘Thought echo’ is a classic form of auditory hallucination in which you can hear your own thoughts being spoken back to you, either instantaneously or a moment or two later.

Perhaps this is linked to the delusion that make people think the TV announcer is talking specially to them? Perhaps they’re hearing their own thoughts in some way? Is this a pointer to a fundamental motivator for religious beliefs?

Fans of Julian Jaynes’ The Origin of Consciousness in the Breakdown of the Bicameral Mind will be intrigued! (Thanks to David Holmes for reminding recently me of Jaynes’ remarkable book).

October 15, 2009
The merry-go-round between uncertainty, error detection, and religion
Next Post