Why Rabbi Sacks is wrong on religion and fertility

Why Rabbi Sacks is wrong on religion and fertility November 14, 2009 Epiphenom

Rabbi Johnathan Sacks has been hitting the headlines recently with his latest warnings on the perils of nonbelief. Michael Blume has dug out the transcript of his speech, so you can get it from the horses mouth. 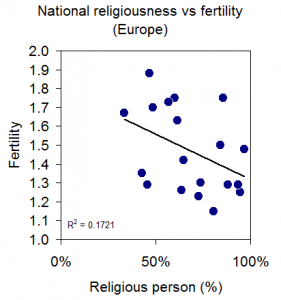 Most of it is the usual stuff… but then comes the bit where he says that atheists are slowly killing Europe because they’re failing to have enough kids.

This is a fascinating claim, not only because it’s factually incorrect but also because of what it reveals about the religious mindset.

First, to deal with the factual inaccuracy. (I’ll dispense quickly with the obvious howler: that Europe is the only region experiencing population decline. North America, China, and Australasia are also shrinking).

I’m more interested in what I’ve shown in the graph, which is that the most religious countries in Europe actually have a lower fertility rate than the most secular ones!

Now, it is true that, within these nations, the most religious people tend to have more offspring. And yet when you look at the country level, the effect is reversed. How can this be?

Well, when you see an effect like this, it’s big red flag warning that there’s a third factor that connects religion with fertility at a social level, only in the opposite direction. And if Sacks had bothered to talk to a demographer, he could’ve easily found out what it was (but then I guess he would’ve got no headlines!).

You see, the factors causing the low birth rates in Europe are fairly well understood, and can be put simply: it’s a clash between women’s aspirations and societal expectations.

The highest fertility rates occur in those European societies where women are enabled to achieve both a career and a family. In a recent paper, the Italian demographer Alessandro Rosina wrote that this will occur in:

…contexts and social categories in which childcare services are more readily available, gender asymmetries are less evident, economic conditions are better, and modern and post-modern values are more diffused

And this is the missing factor that accounts for low fertility in religious countries. Religion is closely connected with conservative values. In traditional, highly religious countries, women have to choose between career and motherhood. In countries that have made the transition to modern values, they can have both.

So much for the statistics, what about the religious mindset on fertility? Well, the reason that fertility is lower in wealthy countries in general (leaving religion out of it) is that whereas children were once a financial asset (not only do they help out on the farm, but they are also your old-age pension), now they are a financial burden.

As a result, birthrates fall. Is this a problem? Sacks thinks so, and as evidence quotes approvingly the 3rd-century BC Greek historian Polybius:

“The fact is, that the people of Hellas had entered upon the false path of ostentation, avarice and laziness, and were therefore becoming unwilling to marry, or if they did marry, to bring up the children born to them; the majority were only willing to bring up at most one or two.”

[Sacks:] That is why Greece died. That is where Europe is today

Now, Sacks doesn’t actually know what the fertility rate in ancient Greece was. I know that, because the leading authority on the subject, Walter Scheidel of Stanford, doesn’t know either. However, there’s no basis for Sacks’ claim that low fertility ‘is why Greece died”. (But see footnote.*)

But why should it matter? So what if Europe’s population decreases?

Well Polybius is notable because his is the first voice in history to express the fear that ‘our’ tribe is going to be overwhelmed because ‘we’ are not breeding as fast as ‘them’. It’s a fear that has echoed down the ages, reaching a zenith in the fascist idea of motherhood as a national duty. You can see it in full flood in modern movements like Quiverfull.

Put simply, this is fertility as an extension of tribal warfare.

Of course, religion is closely linked with other aspects of tribalism (or group cohesion, as a sociologist might put it). Rabbi Sacks’ goes on to say:

The only serious philosophical question is “Why should I have a child?” And our culture is not giving a very easy answer to that question.

He doesn’t himself answer that question, but his polemic gives the game away!

*Footnote: Although we don’t know the fertility rate of Ancient Greece, we do known that Mycenean Greece experienced a population crash. In the 500 years that followed, the population of Greece increased perhaps 10-fold. By Polybius’ day it had reached the point where the population could only be sustained by dominating neighbouring countries and sucking resources in – a fact that probably explains as well as anything the Greek’s subsequent demise.

Europe is currently running at 220% of biological capacity. Similar to ancient Greece, we’re pillaging the rest of the world to maintain our lifestyle. Rabbis Sacks urges us to be custodians of future generations, and yet a swelling population is the greatest enemy that our children face.

Having a large family is not self-sacrifice. It’s the ultimate in selfishness.

November 10, 2009
Religion causes inequality (or is it the other way around?)
Next Post

November 17, 2009 Religious brain, pragmatist brain
Recent Comments
0 | Leave a Comment
Browse Our Archives
get the latest from
Nonreligious
Sign up for our newsletter
POPULAR AT PATHEOS Nonreligious
1