Does prayer make you more forgiving… and why?

Widely reported earlier this week was a study on prayer and forgiveness. It’s by the same crew that gave us the study last year on prayer and gratitude, and has (broadly speaking) the same methodological concerns (it only recruited students who already pray, and uses measures that are difficult to interpret).

But, fair doos, this is an interventional study of the effects of prayer that is basically sound, and the authors deserve kudos for trying to assess this unfashionable area. So what did it show? 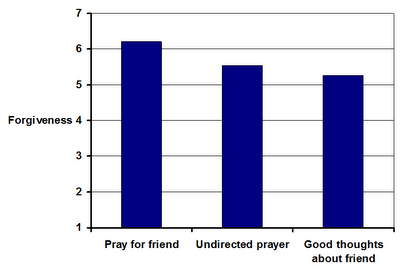 Well, they recruited 67 Christian students in Florida, and asked them either to pray for a friend, or to pray without specifying what for, or to think positive thoughts about their friend. They had to do this every day for 4 weeks.

Then they measured the degree of forgiveness they felt towards their friend. As the graph shows, forgiveness was greatest in the ‘pray for a friend’ group.

They suggest that the reason for this is that prayer creates a generalised feeling of selflessness, although this seems theoretically unlikely to me and the evidence they provide for it is rather tendentious.

So what do we know about prayer? Well, brain scans suggest that praying is much like talking to a friend. So maybe talking to a confidant about a third party helps to generate forgiveness.

Furthermore, although they didn’t measure the beliefs of the participants, it’s likely (given the local culture) that many of them believed in an active, personal god who can step in to change things in the world around them – including other people.

It’s much easier to have forgiving thoughts about people if you think that they are going to change. If these students thought that praying for someone is sufficient to change them for the better, it seems very likely that would made them feel more forgiving.

February 2, 2010
Bound to happen (especially if you're an Asian Christian)
Next Post