God prompts can scare us into trying to do the impossible

God prompts can scare us into trying to do the impossible March 31, 2010 Epiphenom

According to new research from Tina Toburen and Brian Meier at Gettysburg College, Pennsylvania, giving subliminal messages about religion can make people work longer trying to complete a task that’s actually impossible, and make us more anxious about it to boot.

What they did was to ask a group of college students to unscramble ten anagrams. Unfortunately for the students only four could actually be solved – the other six were a meaningless jumble of letters!

They were told they could take as long as they needed to complete the task – up to a maximum of 20 minutes. What’s more, they measured their anxiety levels both before and afterwards.

All the students also got some prework, including forming sentences from a word salad. For half of them, these sentences included words related to God and religion. In fact, this was a subliminal prime to get them thinking subconsciously about God.

So the question is, how did the students who got the subliminal God prime fare in the anagram task? 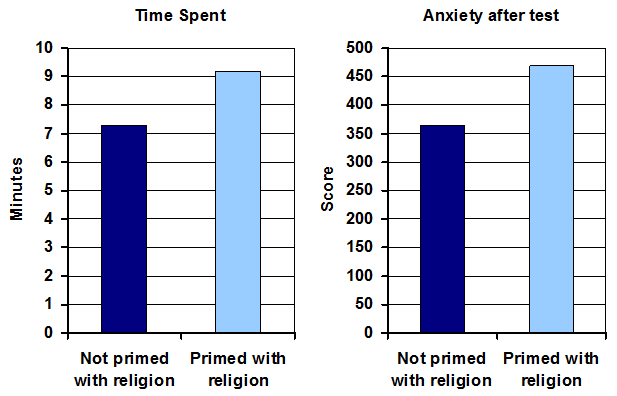 Well, the graph reveals the overall results. Those people who got the subliminal god prime stuck at the task longer and became more anxious when they couldn’t solve it.

Interestingly, this effect wasn’t weaker in people who had weaker beliefs in God. other priming studies have also found this – it might be down to the fact that students in the US are raised in religious environments, even if they are not religious themselves.

The authors think the primes might have this effect because they made people people feel that God was watching them. Alternatively, they suggest that merely reminding people about authority figures might also do the trick.

Either or both of these things might be happening – only further research will show. But it’s interesting to contrast this with other research into anxiety.

For example, people who are more religious tend to be less, not more anxious (although anxiety seems to trigger churchgoing).

Even more relevant to the current study is a finding that religious people show less ‘error response negativity’ when they make mistakes. This is a pattern of brain activity that’s linked to anxiety over making mistakes.

Taken at face value, these two results together suggest that religious people are inherently less worried about making mistakes, but when reminded of their god they get highly stressed about failure!