Is this why atheists are, on average, more intelligent?

There’s a new paper out by Satoshi Kanazawa which is causing a bit of a stir. You might have seen something about it already – I’m a little behind the curve on this one, but on the plus side I have actually read the paper, unlike many other pundits!

What’s got people talking is the correlation between atheism and intelligence, although that isn’t what the paper is actually about. It’s already pretty well established that atheists tend, on average, to be more intelligent. This paper firms that finding up a bit more, but makes a bigger claim than that.

But before delving into the paper, I want to just cover a few commonly raised objections that tend to fly about whenever the intelligence-atheism link is raised.

Perhaps more importantly, general intelligence has a genetic component and a substantial environmental one. And so any time anyone tries to use intelligence scores to make racial claims, you can probably disregard them.

So, with that in mind, what did Kanazawa find?

There were actually two studies, both using US data. The first looked at intelligence scores from a group of adolescents (junior high and high school), and compared it with their religious beliefs 8 years later. 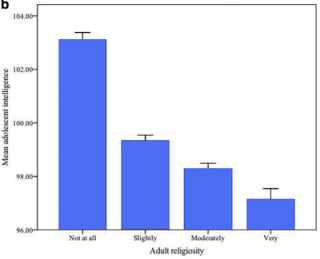 The figure shows that atheists are smarter by a good few points on average. And the link remained even after Kanazawa corrected for age, sex, race, education, earnings, and even religion. It’s not a trivial difference. In fact the effect is pretty strong – stronger than the effect of education, for example.

The second was from the general social survey – a survey of adults. Once again religion (belief in god and religious intensity) was strongly related to intelligence, even after correcting for a host of factors that you might think could explain the link.

So what? Well, Kanazawa believes that the explanation for the link lies in the Savannah hypothesis. This is the idea that general intelligence evolved as a way to deal with evolutionarily novel situations. It lets us transcend our evolved behaviour and do things that contravene our instincts.

In support of this, Kanazawa shows that intelligence is linked to liberal ideals in the same way. In particular, the link seems to be between intelligence and openness to support of people from other ethnic groups (i.e. whites supporting government intervention to help blacks).

What’s more intelligence in those adolescents increases belief among men (but not women) in sexual exclusivity – i.e. that people should not sleep around.

If Kanazawa is right, then intelligence should not be linked to behaviour that is not evolutionarily novel. And, indeed, attitudes to children, marriage, family and friends are not linked to intelligence.

It’s an interesting hypothesis, and an interesting analysis. To me, it seems intuitively reasonable that general intelligence should have evolved as a way of solving problems. But it will take more than this study (and his previous one) to convince me.

The problem is that intelligence and rational thinking are different beasts:

The idea that Bush is just one foolish smart person among many, and that intelligence is a poor predictor of “good thinking”, comes from a series of recent experiments that compared the performances of people of a range of intellectual abilities on rational-thinking tasks. In a study published last year, Stanovich and Richard West of James Madison University in Harrisonburg, Virginia, found there was no correlation between intelligence and a person’s ability to avoid some common traps of intuitive-thinking. (New Scientist)

You see, intelligence only helps overcome the cognitive biases that lead to poor judgement if you are the the kind of person who uses it. It’s not so much about innate braininess, it’s about how you approach the world.

February 26, 2010
A personal god boosts the placebo effect
Next Post