Atheists are disagreeable and unconscientious

A new analysis comparing the personalities of religious and less religious people has found that religiosity is generally linked to agreeableness and conscientiousness. Well, that’s the headline. To understand why this might be, you need to dig into the details of the study.

Vassilis Saroglou, a leading expert in personality and religious psychology research, has done what’s called a meta-analysis – statistically combing the results of dozens of older studies to discern the average. He looked at 63 studies from around the world looking the five-factor model of personality.

The five-factor model is the most widely used measure of personality. According to this model, individuals can be defined according to where they lie on one of five scales: extroversion, agreeableness, conscientiousness, neuroticism, and openness.

One consistent finding stood out: across all measures of religion, cultural areas, and age groups, people who scored higher on agreeableness and conscientiousness also reported being more religious. 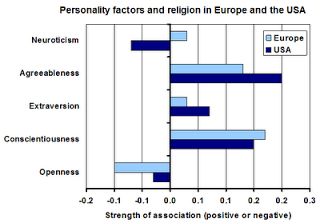 There were important cultural differences. As you can see in the figure, religious people in Europe are less agreeable compared with those in America. Unlike the American religious, those in Europe are more closed-minded than the non-religious.

I believe the reason for this lies in the fact that religion is less popular in Europe. Agreeableness is the “tendency to be compassionate and cooperative rather than suspicious and antagonistic towards others” (Wikipedia). It’s characteristic of social people – the joiners. In the US, where religion is so common, it would take a disagreeable person to reject the social norm.

In Europe, however, it’s easier to declare yourself non-religious and yet still be part of the mainstream. Some of the people who in the US would be ‘social religious’ are social non-religious in Europe.

As a result, those people who retain religion in Europe tend to be in it for more hardcore reasons. I suspect this also explains why the religious in Europe are more closed-minded – which is a characteristic of fundamentalist religion.

What about conscientiousness? Well, this factor is all about planning and dutifulness, versus a more hedonistic style of living for the moment. Religion is, by it’s nature, attractive to the sort of people who are willing to make sacrifices now (going to church) for benefits in the distant future (rewards in heaven).

So I think that the personality differences between the religious and less religious are broadly understandable in terms of the cultural factors that are associated with religion. In other words, it’s less about what kind of personality is likely to have supernatural thoughts, still less about the effects that atheism or religion might have on personality. It’s more about what kind of person would be attracted by the social environment provided by religion in their particular neck of the woods.

Most of these studies were done in the USA (many in US students). It would be very interesting to see a more formal analysis of the personality types that are associated with religion in places where religion is now a minority pursuit.

And there is one important caveat you need to bear in mind. These studies for the most part treat religion as a continuum. Although some did look at fundamentalism, none actually looked at atheism. We can suppose that the personalities of the low-religious are shared by atheists, but until the studies are done, we can’t really be sure.

March 1, 2010
Is this why atheists are, on average, more intelligent?
Next Post

The Two Factions Forming in the...
Roll to Disbelieve
Related posts from Epiphenom