The hypnotic power of charismatic religion

Whatever else you think about charismatic preachers, they have a dramatic power over their audience. While their followers believe them to have special powers, a new brain imaging study by Uffe Schjødt at Aarhus University in Denmark suggests that it’s all just a product of their imagination.

In fact, the brain imaging study is only part of the story. What’s even more remarkable is what it says about how some people come to fall under the spell of these charismatics.

What they did was to take a small group of pentecostal Christians and a matched group of non-believers. Both were chosen so as to represent the extreme ends of the belief scale. 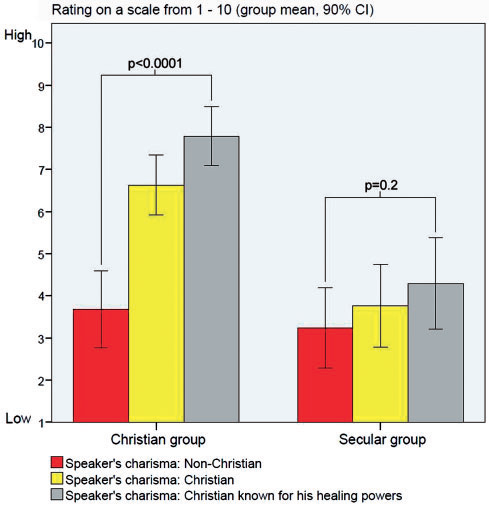 So there was no real difference between the prayers (the speakers were mixed up to make sure differences in speaking style could not affect the experiment). The only difference was what the listener was told, but what a dramatic effect it had!

When asked, the pentecostalists rated the one they were told was a healer as the most charismatic, and the person they thought was non-religious as much less charismatic (see the graph). For the non-believers, there was a slight trend in the same direction, but it was small and insignificant. Basically, they weren’t taken in by the deception.

But the pentecostalists were. Just telling a pentecostalists that someone has healing powers makes them think that they are highly charismatic. What’s more, they didn’t feel God’s presence in the prayers read by the person they were told was a non-Christian.

And the regions that were deactivated by the ‘charismatic healer’ were all associated with ‘executive function’ – the part of the mind that evaluates, monitors, and makes decisions. A similar response has been seen in the brains of people undergoing hypnosis – as well as meditation.

In other words, they went into a bit of a trance.

What Schjødt thinks is happening here is that, when we listen someone we trust implicitly, we switch off our critical faculties, and just let what they are saying wash over us. In the words of the researchers, “subjects suspend or ‘hand over’ their critical faculty to the trusted person.”

Now, in this scenario the atheists were immune to the powers of the charismatic preacher. But we shouldn’t run away with the idea that this is a particular characteristic of religious people. Stage hypnosis shows that you that you can see similar effects in secular situations – and Milgram’s scary experiments in authority also spring to mind.

What strikes me most about this study is that the charisma of the preacher was all in the minds of the subjects. They were willing dupes.

And what this study also shows is just how closely linked the razmatazz of charismatic preachers is to the showmanship of stage hypnotists. They seem to be exploiting a common human weakness – and one that has enormous power!

April 21, 2010
The ethical dilemma for doctors in religious hospitals
Next Post

April 27, 2010 Sex lives of the atheists (and everyone else)
Recent Comments
0 | Leave a Comment
Browse Our Archives
get the latest from
Nonreligious
Sign up for our newsletter
POPULAR AT PATHEOS Nonreligious
1