Spite is the flipside of brotherly love

Spite is the flipside of brotherly love April 9, 2010 Epiphenom

The biologist JBS Haldane famously said that he would lay down his life for two brothers… or eight cousins. That’s kinship altruism – the idea that it makes evolutionary sense to sacrifice yourself to benefit close relatives (who share a lot of your genes). But there’s another side to kinship altruism, as described by two Oxford University biologists, Stuart West and Andy Gardner, in a recent paper in Science. 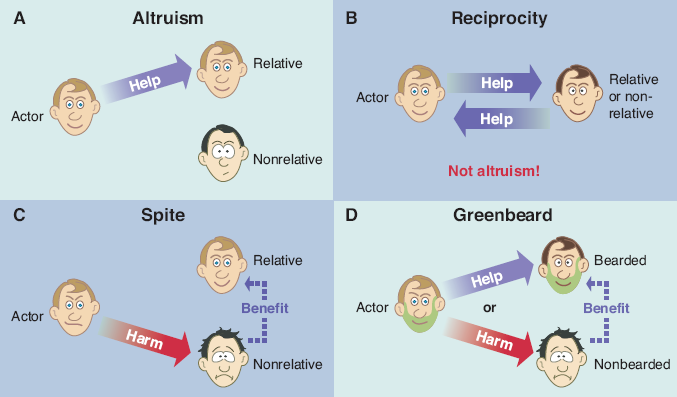 They point out that spiteful behaviour – acting cruelly for no gain to yourself – actually makes sense (in certain circumstances) for the same reason kinship altruism does. If your relatives benefit from your spiteful behaviour (or even if the target of your spite is less related to you than the average stranger) then then your genes could benefit.

In fact, from an evolutionary perspective, spite and kinship altruism are the same thing (they’re both explained in mathematical terms using ‘Hamilton’s Rule’).

Now, West & Gardner don’t mention religion, but this fact has interesting implications. As the anthropologist Lyle Steadman has pointed out, almost all the world’s religions use kinship terms (mother, father, brother, sister) to refer to their co-religionists.

The idea is that religion helps to stabilise large societies by subverting our intuitive kinship altruism and extending it to non-relatives. Which is all well and good for co-religionists, but the downside is that people of a different religion then become emphatically non-kin (failing both real and religious kinship criteria).

Which might help to explain the spiteful actions that often occur between followers of different gods.

West and Gardner also discuss so-called ‘green beards’. This refers to genes (or gene-complexes) that code for an altruistic trait and also for a signal. Dawkins coined the term to describe the hypothetical case of a gene that simultaneously codes for the green beard itself and also for co-operative behaviour towards fellow green beards.

It’s been suggested that just such a linkage could explain the rise of religion – if religious displays are a reliable guide to honest behaviour.

However, West & Gardner put the kybosh on that idea. Green beards are unlikely to be relevant to human evolution, because personality traits are complex and not due to genes that could also code for a visible signal:

Some models for altruism in humans and social insects implicitly invoke greenbeard mechanisms without realizing this, such as the suggestion that altruistic individuals differ from individuals who are not altruistic in some observable characteristic [such as being more likely to smile and laugh] or models of “strong reciprocity” that assume punishment and altruism to be genetically linked. However, there is no reason to suspect that traits such as smiling or punishment will be encoded by the same gene or closely linked genes as those that lead to altruism. Consequently, falsebeards could arise, and these proposed explanations for altruism would not be evolutionarily stable.

And finally… I actually learned about this article from a Christian blogger, who picked up on one sentence about how kinship altruism can lead to a particular kind of social behaviour. He says the authors:

… point out that “strict lifetime monogamy, in which femalesonly mate with one male in their entire life, is crucial forthe evolution of eusociality.” This provides a very natural scientific basis for understanding the critical importance of “thou shalt not commit adultery”

Now, this is very funny when you know that ‘eusocial’ is a very specific term used to describe the kind of society exemplified by honey bees – one dominant queen, with a slavish workforce comprising her sterile daughters. It sounds like adultery is the only way to save us from a bleak future!

I don’t think the blogger is actually hoping for a bible-based eusocial future for humans. Most likely he simply doesn’t realise what eusocial means – hard to believe when the paper illustrates it with pictures of termites and sterile worker shrimps!