Why religion can lead to racism

Why religion can lead to racism April 18, 2010 Epiphenom

Religious people are more racist than average [edit: this is in the USA. It probably also applies to Europe, but not necessarily to the rest of the world]. That fact has been known for decades, and it’s rather surprising given that mainstream religions are unanimous in preaching racial tolerance. Just why this should be is not well understood.

Does religion really cause racism, or is it that are racists drawn to religion? Three recent studies have shed a little light on that question, with fascinating results.

Can you make someone more racist simply by subtly reminding them about religion? That’s what Wade Rowatt and colleagues set out to discover. They gave a group of college students a task that had religious cues embedded within it. The idea was to prime their subconscious with religious thoughts.

Then they asked them about their racial attitudes. Although the primed students didn’t come straight out and admit to greater racism, their covert racism did increase. Rowatt and colleagues also found that students, when religiously primed, were more likely to agree that they dislike African-Americans.

So religious thoughts seem to trigger racist thoughts. One obvious explanation for this is that religion tends to increase benevolence towards co-religionists, but can increase hostility towards outsiders.

But in the USA, most Whites and African-Americans are Protestant Christians – not only the same religion, but the same sect! It’s true that worship and religious styles are often segregated, but it seems far-fetched to say that the religious differences came first.

There might be more to this study than first meets the eye, however. Rowatt’s group of students were rather unusual. They were all undergraduates at a southern, Christian university (Baylor College, Texas). There is a powerful tradition of segregation in this region. Perhaps the religious prompts were triggering feelings of social conservatism?

That would fit with the results of a recent analysis of studies reaching back over several decades and looking at the correlation between different aspects of religion and racism (all of which were done mostly or entirely in the USA). This analysis, by Deborah Hall at Duke University and colleagues, found no correlation between racism and the liberal, ‘questioning’ form of religion.

The aspect of religion that was linked strongly to racism was so-called ‘extrinsic’ religiosity – a measure of whether the individual’s religious attitudes are driven by a desire for social conformity and social status. 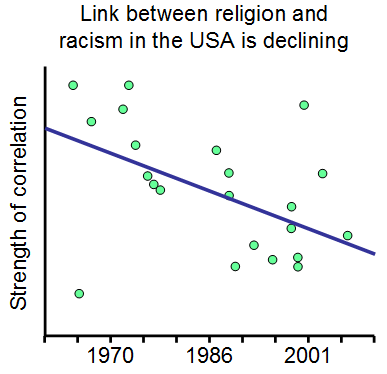 An even more fascinating finding was that the strength of this correlation is declining. As racist attitudes gradually become socially unacceptable, so the link between ‘extrinsic’ religiosity and racism is ebbing away.

The world view promoted by religious fundamentalism has many facets that look a lot like the precursors of right wing authoritarianism. Fundamentalists tend to believe that knowledge consists of simple truths which are either right or wrong (good or evil, with us or against us), which are unchanging, and which are handed down by a powerful authority and not to be questioned. All of these could lead to right-wing authoritarianism.

Laura Barnes, at Oklahoma State University, and her grad student John Hathcoat set out to test this model analysing the beliefs of undergraduate students. They used a statistical technique, bootstrapping, to test whether the model was plausible. 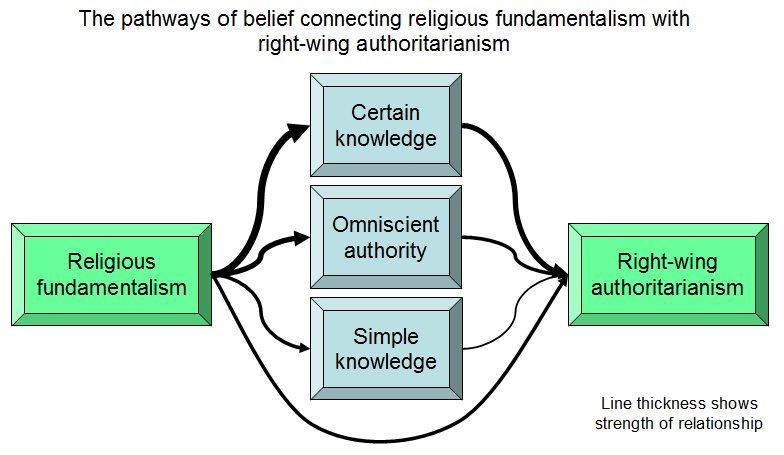 This analysis doesn’t prove the causal link, but it does show that it’s plausible. What’s more, they tested a model that worked in the opposite direction, and found it didn’t fit the data nearly so well.

In other words, fundamentalist beliefs really do seem to lead down a pathway towards right-wing authoritarianism (and so on to racism).