Where Mormons Thrive May 8, 2010 Epiphenom

Among the great American exports to the rest of the world, there are a bewildering variety of religious cults and sects. Not all have take root, but the most successful – groups like the Mormons, the Jehovah’s Witnesses, and the Seventh Day Adventists – now number in the millions.

Their success is mostly down to prosyletisation, in addition to any endogenous growth (due to fertility) that was the topic of the previous post.

So why are they so successful, and perhaps more importantly where are they successful? Is it something intrinsic to what they offer, or is it more to do with finding fertile soil and a receptive, willing audience? That’s what Ryan Cragun (University of Tampa) and Ronald Lawson (CUNY) set out to discover.

They analysed how these three religious had grown in different countries around the world, to see what kinds of countries saw the most rapid growth, and also whether growth was self limiting. 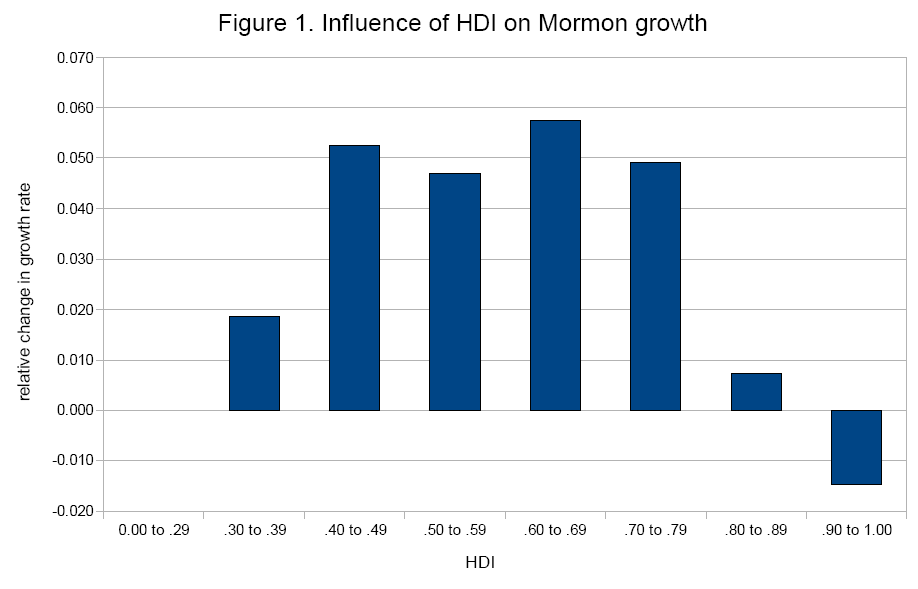 In turns out that their fastest growth rates are in middle income countries – not at the bottom of the scale, where grinding poverty is most apparent, nor in wealthy countries.

The graphic shows this for the Mormons. The ‘Human Development Index’ is a standard measure, developed by the UN, which combines life expectancy, adult literacy, and per capita GDP. Mormons grow fastest in countries mid-way along the index.

It’s hard to say why this might be, but it may be linked to the social upheaval that goes hand in hand with modernization. Perhaps people turn to these new, highly active religions to help deal with the stresses and uncertainty that this upheaval can cause.

The other important finding is that growth appears to be self limiting. After an initial burst (the ‘growth momentum’), then growth slows in proportion to the number of people already converted. It’s as if there is a certain pool of people who are attracted to these groups and, once they’re in, recruitment falls away.

What’s intriguing, however, is that there doesn’t seem to be competition between groups. In other words, the growth rate of Mormons is slower if there are already a lot of Mormons in the country, but it’s unaffected by the numbers of Jehovah’s Witnesses.

That suggests that these groups appeal to different kinds of people – although an alternative explanation is simply that the hotspots of each group is separated geographically within a country.

Mormons and Jehovah’s Witnesses have both seen a significant slowdown in growth in recent years, although for Seventh Day Adventists the slowdown is less significant. This is probably because most current Mormons and JWs today live in relatively wealthy countries, where prospects for conversions are poor. In Europe, the number of JWs is actually falling!

May 4, 2010
Shall the fundamentalists inherit the earth?
Next Post

May 10, 2010 Who's to blame for the financial crisis?
Recent Comments
0 | Leave a Comment
Browse Our Archives
get the latest from
Nonreligious
Sign up for our newsletter
POPULAR AT PATHEOS Nonreligious
1