How are British kids doing these days?

How are British kids doing these days? July 17, 2010 Epiphenom

British society, like that of most industrialized nations, has gone through enormous changes in recent decades. But it’s hard to get objective data on what the impact has been on the people living there.

Which is why I was interested to see a recent study by Stephen Collishaw, of Cardiff University, and colleagues. They compared data from two studies, one in 1986 and one in 2006, that asked adolescents (aged 16-17) about their state of mind. Whether they felt anxious, depressed, worried, irritable, had disturbed sleep – things like that.

Overall, the percentage saying they were frequently anxious or depressed has roughly doubled since 1986.

It’s possible, of course, that kids today are simply more open about talking about admitting their feelings. That could be the case, although the authors point out that they did not see a general increase in all emotional problems. Instead, they found that some problems (irritable, disturbed sleep, worn out) increased, while others did not. 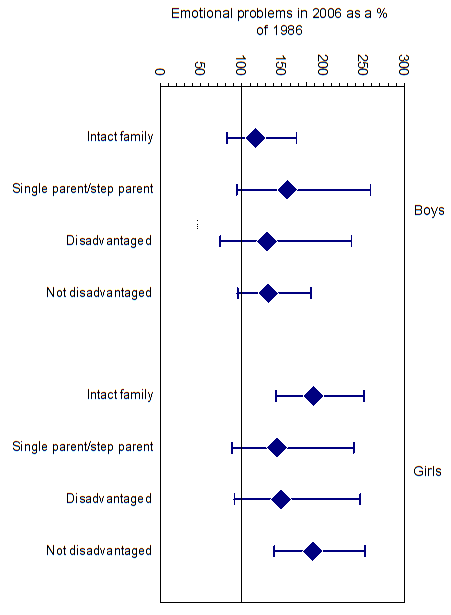 They found no consistent differences. The increase in emotional problems seems to be roughly the same across all social backgrounds. If anything, the greatest increase seems to be among girls with both natural parents and advantaged backgrounds.

Why could this be? It’s very hard to say. Potentially, the higher levels of uncertainty of modern life, coupled with more fractured social networks. But this is just speculation.

What can be said is that while life has not got any harder for the children of divorced parents, it doesn’t seem, on this evidence at least, to have got much easier – and that has got to be troubling, given the increasing numbers of children living in homes without both natural parents.

July 19, 2010 Who you are!
Recent Comments
0 | Leave a Comment
Browse Our Archives
get the latest from
Nonreligious
Sign up for our newsletter
POPULAR AT PATHEOS Nonreligious
1