Cliff Huang has created some amazing graphics depicting racial segregation in US cities. What I found fascinating was quite how sharp many of the boundaries are. They’re often sharper than you would expect if the causes were simply economic.

That’s because there’s a powerful social phenomenom at work here, which is simply that people prefer to be with their own ‘kind’. If you identify with a particular community, and that community is defined ethnically, then living outside of it can be very uncomfortable.

Which brings me to some recent research by Chris Scheitle, at Pennsylvania State University, and Kevin Dougherty, and Baylor University. They’ve analyzed data from over 400 people who took part in the US Congregational Life Survey to find out how long people had been attending their congregation, and how that related to whether they were in a minority or majority group. 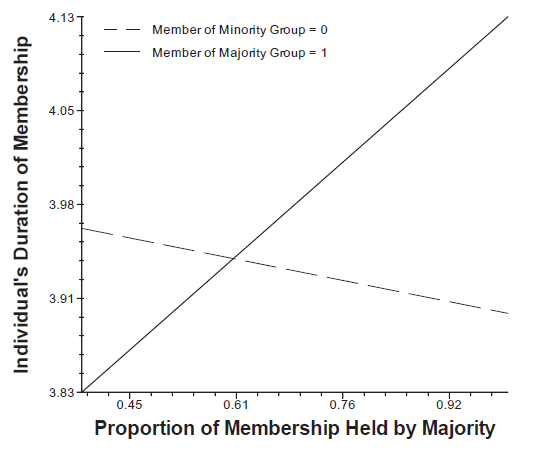 Now, all sorts of factors could explain this. But even after they took account of the obvious ones (including demographics, type of congregation, and whether the congregation is growing) they found that there was still a significant interaction: the bigger the size of the majority group, the more important majority membership is for predicting membership duration.

The lines cross at about 60%. So, when the majority group is only 60% of the congregation, then the average membership duration of minority and majority groups is the same.

Now, it is possible that the US has recently undergone a major racial mixing, so that congregations are becoming radically less segregated (which would lead to new members tending to be of minority groups). But the alternative explanation, and the one the authors think is most likely, is that members of racial minorities are more likely to leave.

That would fit in with other research into racial segregation. The problem is not simply straightforward racism. There are also language, food and other cultural barriers. Different people do things differently, and that can make it hard for outsiders to fit in.

And all of this causes problems for the ‘religious market’ theory of religion – the idea that people are free to pick and choose their religion according to whether it fits their beliefs. If ethnicity is the barrier that it seems to be, then religious choice is much more restricted than the theorists often assume.

October 20, 2010 Young kids can't help believing what they're told
Recent Comments
0 | Leave a Comment
Browse Our Archives
get the latest from
Nonreligious
Sign up for our newsletter
POPULAR AT PATHEOS Nonreligious
1