Your religious beliefs, like many aspects of personality, tend to crystallise in your late teens and early adulthood. It’s a period of tremendous change but, once set, few people undergo and radical changes.

Even so, some kids change, while others do not. It’s interesting to speculate on why that might be. What separates the changers from those who stay the same? Is it genetics, or is it environment?

A recent study has looked at this using data from two twin studies in Colorado, USA. The basic idea is simple: they measured religiosity at around 12-18 years old, and then again around 5 years later.

By comparing identical twins with non-identical twins, you can estimate the importance of three factors contributing to the change:

Now, it has to be said that there are a lot of caveats to these kinds of studies. The gene-environment interaction is complicated, and the effect of genes in one environment likely differs from the effect in another – including another genetic environment (i.e. the same gene will have different effects in different people).

There’s an additional problem when linking genes to personality. The classic example is genes for skin colour. Your skin colour affects the way people treat you, which in turn affects your personality. Gene linkage studies would show that your personality is genetically determined, whereas in truth its the environment (i.e. social prejudice) which is causing the effect!

All in all, lessons from gene studies in Colorado, where the population is mostly religious but undergoing change, do not necessarily apply to Pakistan or Sweden. 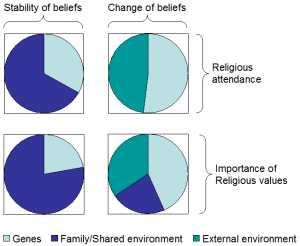 That said, take a look at what they found. For those Colorado kids who kept their religious beliefs as they moved into adulthood, the major influence was their family. Not too surprising- your family environment is a major, constant factor.

Interestingly, however genes only play a minor role – especially when it comes to the importance of religion in their lives. Keeping the faith is largely a function of family pressure.

Looking at what lies behind changing religious beliefs, you can see that the external environment (the stuff that one twin is exposed to but the other is no) plays a vital role. Change is driven by outside influence.

But it’s also driven by genetics – and to a greater extent than religious stability. What this seems to indicate is that some effect of genetics is critical to changing beliefs.

In the case of these Colorado kids, the most common change (in common with kids elsewhere in the USA) was a decrease in religious attendance and also in the importance attached to religion.

So some kids are genetically predisposed to shift their beliefs. Unfortunately, what this study doesn’t tell us is why. Perhaps these genes somehow lead to a rejection of religious worldview. That’s certainly a possibiliy.

But I wonder whether perhaps some kids are just born to be different. Perhaps these kids are becoming non-religious because it shocks the old folks. Perhaps, in a world of atheists, these would be the kids picking up religion!

September 28, 2010
Atheists! Think you know more about religion than the faithful?
Next Post

October 4, 2010 Suicide, age and poison
Recent Comments
0 | Leave a Comment
Browse Our Archives
get the latest from
Nonreligious
Sign up for our newsletter
POPULAR AT PATHEOS Nonreligious
1