Americans: not as religious as they think they are

Americans: not as religious as they think they are January 7, 2011 Epiphenom

We’re used to hearing that America is an exceptional nation when it comes to religion. Certainly, the hold that religion has over public life is unparalleled among wealthy nations, and most Americans readily tell pollsters that they are dutifully religious.

But it seems that American religiosity might also be exceptional for quite another reason. It turns out that the gap between what they tell pollsters and what they actually do is bigger than for any other nation.

We’ve known for a long time that, when asked, people report going to Church more than they actually do. That’s not too surprising. It’s well known that, when you ask questions that relate to personal esteem, people will tend to tell you what they wish was true, rather than what actually is true.

They tell you what they want to believe. 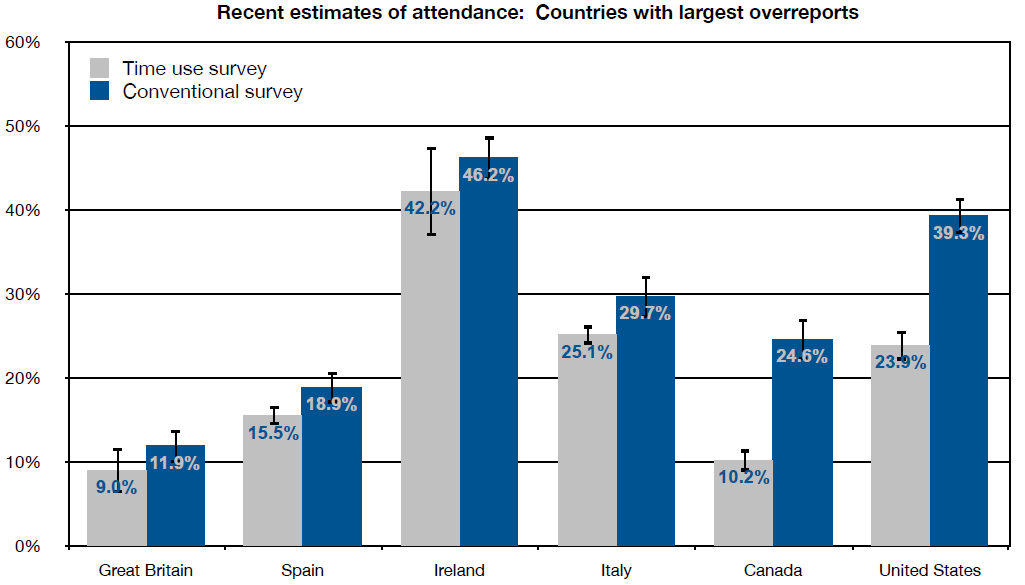 Philip Brenner, at the University of Michigan, set out to see if this gap, between reports and reality, was the same in all countries. He used data from a variety of surveys, and compared it to so-called “time use” studies. These studies ask participants to write down each day what they have been doing.

He found that Americans say they go to Church about twice as often as they actually do. That’s pretty similar to what has been found in other studies.

In other countries, however, the gap was much smaller – in fact, for many of them, it was non-existent (the bar chart only shows the worst offenders). It’s not a recent phenomenon either. Brenner plots graphs for each of the 14 countries he studied. The graph for the USA shows a pretty consistent gap for the past 40 years (the paper isn’t yet published, but I’ll put the graphs up when it is).

Compare that with the Netherlands, where Church attendance has gradually declined, with polling surveys and time-use reports pretty much matched all the way.

Broadly speaking, there were three kinds of countries. Those where Church attendance is steadily falling (Netherlands, West Germany, France Slovenia, Spain, Austria, Ireland), those where Church Attendance has always been low (East Germany, Norway, Finland, Britain), and one (Italy) with a more complex picture.

But only the USA and Canada showed a marked gap between reported Church attendance and reality. Why should that be? According to Brenner:

So I think they are being honest with how they understand the question: ‘Are you the sort of person who attends religious services?’ is what they think they hear and they say yes.

So could it really be that could be that religion is an important part of identity in these countries but not in Europe? Possibly, but I don’t really think that’s the case in Canada. Certainly not when compared to Ireland and Italy!

So there must be something else in North American culture that prompts people to say they are more dutifully religious than they really are. It beats me what that could be – but, perhaps, whatever it is is the same factor that make religion so resilient in those countries?

Brenner, Philip S. (2011). Exceptional behavior or exceptional identity? Overreporting of church attendance in the US Public Opinion Quarterly: In press