Is religion going to die out in 9 countries? Well that depends…

This week the BBC picked up on a mathematical analysis, first published back in January, which predicted that religion is on the road to oblivion in 9 Westernised countries (Australia, Austria, Canada, the Czech Republic, Finland, Ireland, the Netherlands, New Zealand, and Switzerland).

Unsurprisingly, the report went viral. But is the study any good? Well, you can read it for yourself, as the report (which hasn’t been peer-reviewed), is posted on arXiv. Here’s my take on it.

In this study they began by assuming that religion is defined soley by self-reported identification with a religious group (i.e. Catholic, Protestant, etc – taken from census data), and that there are only two things that make religion attractive:

They also assume that religion is fixed and unchanging, that all religions are essentially the same, and that all people are the same. 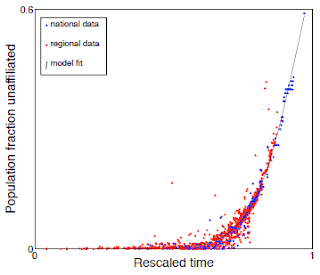 They express this mathematically, and then tweak the parameters until the equation fits the data. Perhaps the most remarkable thing is that this model actually does fit the data, as shown in the figure.

What the graph shows is all the data from the 9 countries showing religious affiliation over time, rescaled and time shifted so they can be plotted on a single graph.

The only way they get the model to fit the data was to assign a value that made religion less useful than non-religion.

So, what this model suggests is that religious decline can be explained simply by the fact that people think that being non-religious is more useful – for whatever reason – than being religious.

That’s a quite remarkable idea, although not unreasonable, if you think about it. What’s more, if their assumptions hold, then religion will steadily decline and eventually disappear.

But will their assumptions hold?

Well, no. For starters, religion is not a fixed quantity. Every generation creates its own religion, and the religions of the future will have greater utility in the modern world. Then, too, people are different, so the picture is inevitably going to become patchy.

More importantly, I actually could imagine that religious affiliation might pretty much die away. We might see a day when almost no-one can be bothered with Churches and Mosques. But will that mean no more religion?

It depends how you define religion, of course. Many of the social and psychological traits that make up Western religion will still exist. They’ll just be put together in different ways.

Will we call these new social constructions religion? Well, that’s up to you!

March 24, 2011
James Watt and the Making of the Modern World
Next Post