In Germany, Protestant culture is more trusting than Catholic culture

Here’s a novel study looking at how religion relates to social trust – you know, how trusting people are of each other. What’s novel about it? Well, first off it’s a study of Germans, so that’s a new perspective we didn’t have before.

Even more interestingly, however, it looks at the cultural effects of religion as well as the individual effects. In other words, if there are, say, more Protestants in an area, or more churchgoers, does that make people more trusting? Even if they are not Protestants themselves?

Germany’s a particularly good place to look for these sorts of effects because the country is basically split into the north, with a mostly Protestant heritage, and the south, with a mostly Catholic heritage.

Just a word of explanation here. These are religious affiliations we’re talking about – rather than intensity of belief. So in a sense it’s almost a cultural identity. In the same vein, East Germans are more likely to be non-religious and also to be distrustful, but the authors adjusted the stats for that.

And he found that people who attended Church more often were also more trusting – and this seemed to be especially the case for Protestants. However, there was no ‘society-level’ effect of church going. Simply living in an area of high church going didn’t result in higher levels of trust.

What this suggest is that there is something special about Protestantism, as opposed to religious belief in general, that contributes to a more trusting society.

What this could be is hard to say. Other studies have found similar effects and it may be, according to Traunmüller, that Protestant tradition is special because it has an “inherent imperative to extend virtues such as truth-telling, reliability, and reciprocity beyond the narrow circle of one’s own family.” 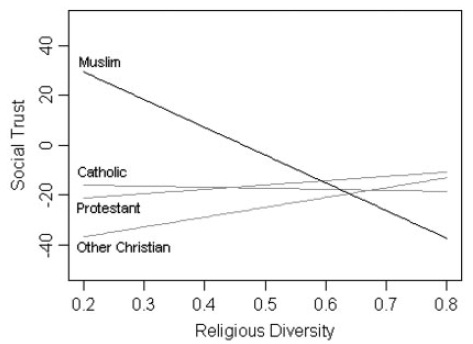 Traunmüller also found an interesting thing about religious diversity. It’s often believed that high religious diversity results in less trust – because people from one religious tradition don’t trust those from another. But he found little evidence for this in Germany.

The one thing he did find was that Muslims are less trusting the more religiously diverse a region is (that’s illustrated in the graph). That’s odd, because high religious diversity in the German context typically means more Muslims.

So the more Muslims live in a region, the less trusting they are. Perhaps, Traunmüller speculates, that’s because once you start to become visible as a group, you start to experience more prejudice, and so start to turn inwards.

July 12, 2011 Normal people more likely to recover from depression (probably)
Recent Comments
0 | Leave a Comment
Browse Our Archives
get the latest from
Nonreligious
Sign up for our newsletter
POPULAR AT PATHEOS Nonreligious
1