How 9/11 grief affected the religious convictions of the victim’s families August 29, 2011 Epiphenom

Grief has a complicated relationship with Western religion. On the one hand, loss of a loved one can reinforce beliefs. On the other hand, arbitrary or meaningless deaths could feasibly undermine belief.

There hasn’t been much investigation into this topic, which is why a new study of the families of 9/11 victims is particularly interesting. Yuval Neria, a psychiatrist at Columbia University, organised a survey of these families. In all, they got completed questionnaires from 608 9/11 bereaved. Each of these had lost either a child, a spouse, parent, some other relative or a close friend or colleage.

They quizzed them on how important religion was to them before the attack, and also how important it was to them now. They also asked them to fill out questionnaires looking at post-traumatic stress disorder, depression, and something called ‘complicated grief’ – which is a condition “marked by prolonged yearning for the deceased, bitterness, interpersonal disengagement and a sense of meaninglessness”. 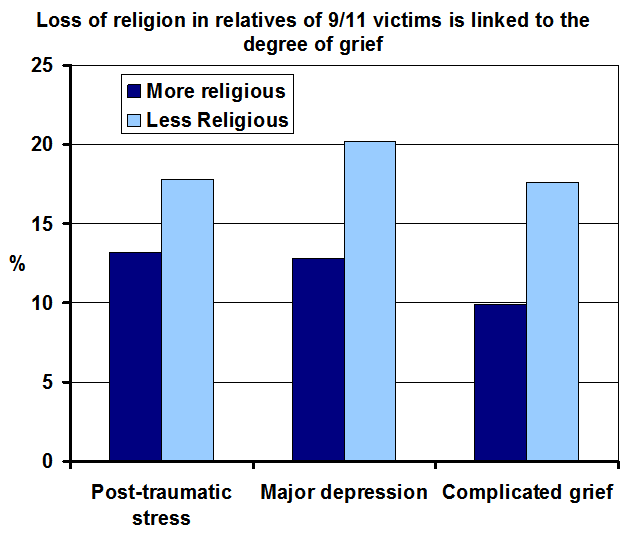 Neria and colleagues conclude that:

“Bereavement from to traumatic loss which commonly entails feelings of purposelessness and futility about the future (Prigerson et al., 1996) may exacerbate the sense of meaninglessness that may underlie the decrease in importance of religion among the bereaved.”

August 24, 2011
Banish your worries by surrendering to God
Next Post

Want to be Better Person? Consider Leaving Organized...
Many people leave religion when they realize their moral standards are superior...
view all Nonreligious blogs
What Are Your Thoughts?leave a comment
Copyright 2008-2021, Patheos. All rights reserved.