Religious nonsense is easier to understand than regular nonsense 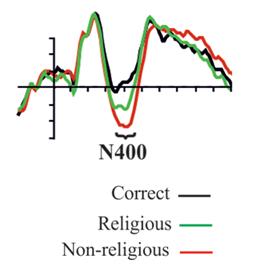 There’s a particular brain wave that gets triggered when you hear stuff that doesn’t make sense.

It’s called the N400, and it’s triggered by sentences like “I like my coffee with cream and socks”. Although each individual word makes sense, and although the grammar is fine, the semantics is screwy – the meaning of those words is pretty unexpected.

Sabela Fondevila and a team from the University of Madrid wanted to find out if religious stories had the same effect. Religious stories typical have some pretty far out indicidents, of course – walking on water, that sort of thing. Are these stories nonsensical, though, or is there some kind of method to their madness?

So they got their subjects to read some carefully phrased sentences describing religious miracles, some matched sentences that had the same grammatical stucture but with random nonsensical claims, and also some completely sensible ones.

To make sure that the religious statements were unexpected and unfamiliar, they took their miracles from non-biblical texts – Hindu, Mesoamerican, Japanese, Egyptian, Greco-Roman, African, Australian, Chinese, Polynesian, and Inuit.

What they found was that the size of the N400 wave was largest for the pure nonsense, and smallest for the sensible sentences. The religious statements were in-between.

This suggests is that the religious statements, although nonsensical and clearly impossible, were not such hard work to understand. For whatever reason, they seemed more sensible than the pure nonsense statements.

Just to make sure of it, they also asked a different group of people straight out: “How easy is it for you to imagine a context (books, films, newspapers, etc.) in which these statements may appear?” Sure enough, the religious statements were thought to be considerably more plausible.

Fondevila thinks that this is further support for the idea that religions are minimally counterintuitive. Previous research has suggested that gods, like comic book characters, tend to be mostly normal with a few special powers.

The theory goes that the most memorable stories are those that are grounded in reality, but have a few counterintuitive twists that make them stand out. And there’s some evidence to support this.

So the ideal god is magical enough to make him interesting and worthy of our special attention as something that could just about be real. But not so magical as to be utter nonsense!

December 14, 2011
Dope smokers are more spiritual than boozers
Next Post