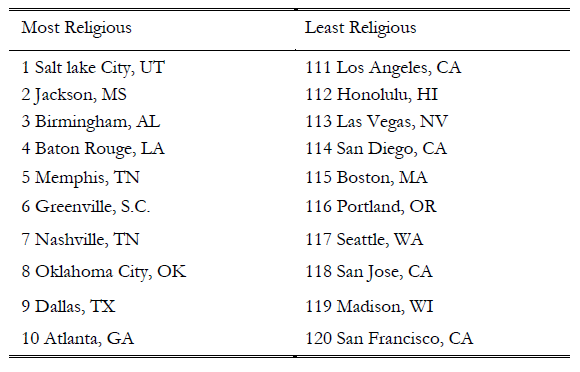 Dan Hess, at Seattle Pacific University, has looked at whether US cities with more religious people also tend to have fewer people getting into debt trouble.

He analysed data from 120 “Metropolitan Statistical Areas” – places with an average population of 1.7 million. You can see a least of the top 10 most religious, and top 10 least religious, in the box.

Overall, more religious metropolitan areas also had better credit scores, fewer foreclosures (by around two-thirds) and fewer bankruptcies (by around 50%).

These were all significant even after adjusting for other local factors, such as the total population of the area, average income, education, age, and the proportion of ethnic minorities. Hess even adjusted for the percentage of Republican voters in the area.

Hess puts this down to a direct and indirect effects.

Firstly , he proposes a direct effect, saying that:

Christian and Islamic scriptures espouse prudence and speak against carrying debt. For example, “The wicked borrows but does not pay back, but the righteous is generous and gives” (Psalms 37:21); “Pay to all what is owed to them: taxes to whom taxes are owed, revenue to whom revenue is owed, respect to whom respect is owed. Owe no one anything, except to love each other, for the one who loves another has fulfilled the law” (Romans 13:7, 8). The Quran states, “If the debtor is in distress, then let there be postponement until he is in ease” (2:280).

Secondly, he says, religion is specifically sought out by “risk-averse individuals who are trying to reduce the anxiety about risk and uncertainty in their lives”. As a result, they are naturally less likely to take financial gambles.

Now, both of these could plausibly influence attitudes to financial risk. However, I can’t see how the second would have any affect on the average debt levels in a county. Assuming, that is, that there are the same proportion of risk averse people in each area.

Which brings me to another point. Eyeballing that list, it seems to me that the two groups of cities have some pretty major cultural differences – of which religion is a part, but surely not the whole story. It strikes me that the least religious metropoli are well, more cosmopolitan.

By that I mean that they are more culturally diverse and culturally dynamic. They are the sorts of places that might attract risk takers. They also seem to be the sort of places to attract people for whom external show and image are important (extrinsics, in the jargon).

However, my knowledge of American geo-culture is not so hot, despite years of avid telly watching. So I can’t really put my finger on what it is – but those cities are just very different!

March 6, 2012
Are religious identity and national identity interchangeable?
Next Post