Jesus shares your political views – but is more extreme

Jesus shares your political views – but is more extreme May 13, 2012 Epiphenom

Lee Ross, a Psychologist at Stanford University in California, and colleagues have polled over 1,200 Americans about their political views, and also what opinions they thought Jesus held.

Unsurprisingly, liberals thought Jesus was generally a pretty liberal guy, while conservatives thought he was rather conservative. How can this be, when they read the same Bible?

But still the gap was huge. American Christians tend to think that Jesus shares their political persuasion.

Now, you won’t be too surprised about that. However, it does make you wonder how they manage to have such radically different ideas.

After all, they are presumably fairly aware that others in their society have radically different ideas about Jesus’ opinions.So how do they reconcile that with their own beliefs? 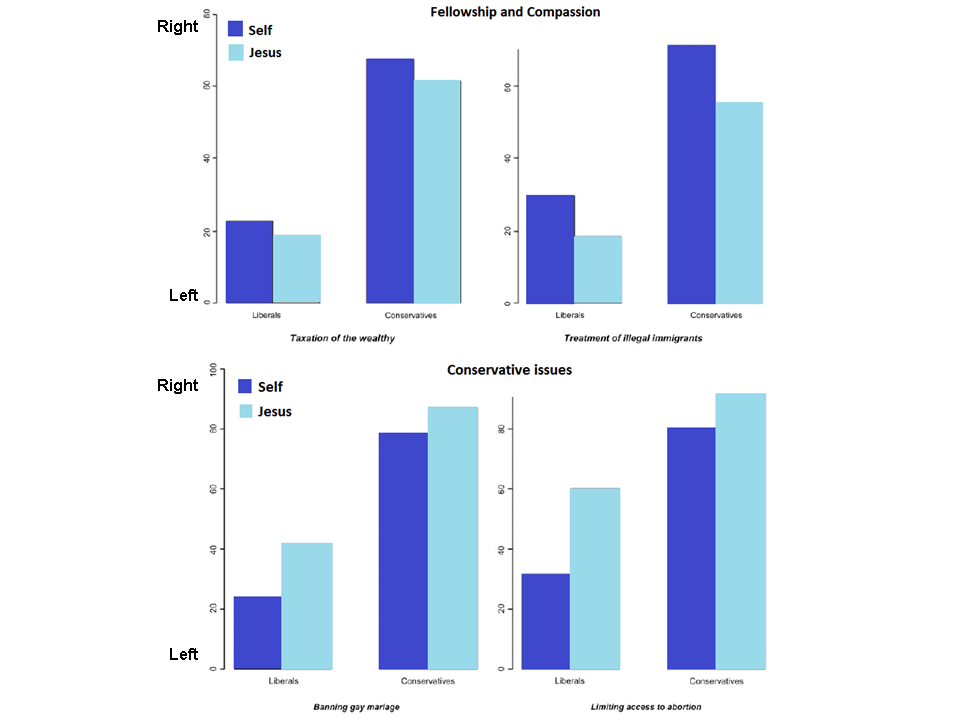 when you drill down into specific political issues, the picture gets a bit clearer.

You see, liberals are more in favour than conservatives of taxing the wealthy and easing the burdens on illegal immigrants. And both liberals and conservatives think that Jesus is more liberal than them on these issues.

In other words, liberals think that Jesus is even more liberal than they are on their core issues of fellowship and compassion.

In contrast, conservatives are more in favour than liberals of banning gay marriage and limiting access to abortion. And both liberals and conservatives think that Jesus is more conservative than them on these issues.

So conservatives think that Jesus is even more conservative than they are on their core issues of morality.

What’s happening here is that both groups seem to have come to an understanding that Jesus is liberal on fellowship issues and conservative on moral issues. Liberals feel tension (cognitive dissonance) because they are not living up to Jesus’ conservative views on morality. Conservatives feel similar tension about Jesus’ fellowship views.

And so, both groups can carry on believing that that they are doing their best to fulfill Jesus’ edicts, even if they occasionally fall short!

May 8, 2012
Non-religious more likely to donate their bodies to science and organs to other people
Next Post

May 16, 2012 Distrust of atheists is reduced if people have confidence in law and order
Recent Comments
0 | Leave a Comment
Browse Our Archives
get the latest from
Nonreligious
Sign up for our newsletter
POPULAR AT PATHEOS Nonreligious
1