May 8, 2012 by Epiphenom
0 Comments
Non-religious more likely to donate their bodies to science and organs to other people May 8, 2012 Epiphenom 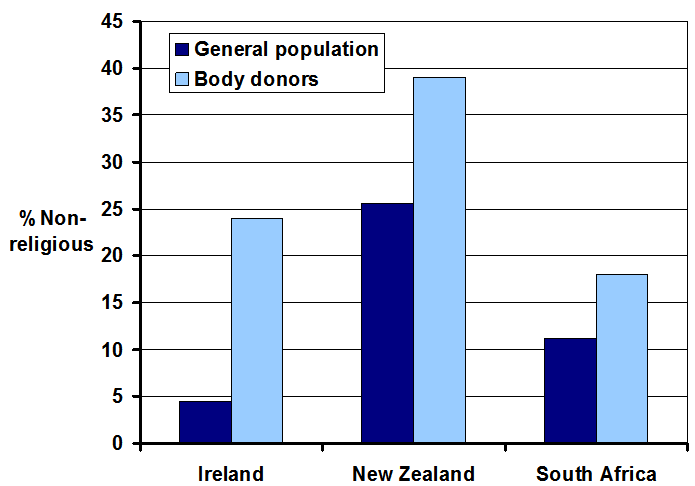 Here’s a simple, but compelling study. Jon Cornwall (University of Otago, New Zealand) and colleagues from Ireland and South Africa surveyed 200 people who had registered to donate their body to science in those three countries.

They found that body donors mostly (80%) cited a desire to aid medical science as the main reason for wishing to
donate their body. They tended to be older (over 60), and to have been in long-term partnerships (either currently or previously). They were also more likely than the general population to report giving time or money to charity, and to be blood donors or organ donors.

And they were more likely than the general population to report no religious affiliation. As the graphic shows, the percentage of body donors without a religious affiliation, although less than 50%, was much higher than expected in each country (the difference is statistically significant in each case).

Now, there could be all sorts of reasons for this – there was no attempt to adjust for the other differences between donors and the rest of the population. However, in general you’d expect older people with a history of giving to charity to be more likely to be religious, not less likely.

There is an exception, however. Religious people are no more likely to be blood donors than the non-religious, and they seem less likely to sign up to be organ donors.

But it’s not just about giving. A recent study in the Netherlands also supports the idea that the non-religious are the most likely to buy into the idea of being an organ recipient, as well as an organ donor.

So is there something special about donating body tissue? Well I suspect there might be. Maybe what is affecting judgements here is essentialism – the idea that all things (especially living things) have some kind of soul or essence that defines them.

After all, if a kidney transplant can make you speak a foreign language, or a heart transplant make you commit suicide, then you need to be a bit cautious!

And perhaps, despite the theological teachings that say a dead body is empty, perhaps ordinary folk-religion takes a different perspective.

May 4, 2012
International religion league tables - who's up, who's down? And why.
Next Post

May 13, 2012 Jesus shares your political views - but is more extreme
Recent Comments
0 | Leave a Comment
Browse Our Archives
Related posts from Epiphenom