International religion league tables – who’s up, who’s down? And why.

International religion league tables – who’s up, who’s down? And why. May 4, 2012 Epiphenom

You may have seen the recent splurge of news stories about how religious different countries are. Depending on where you looked, you may have come away thinking either that belief is in decline worldwide, that Catholic countries are the most religious, or even (and this one is quite bizarre) that people get more religious as they get older. Unless you were reading carefully, you may not even have realised they were talking about the same report!

In fact, the report (which you can read yourself here) shows a pretty fragmented picture with no clear worldwide trends – which is probably why time pressured journalists are finding it tough to get a handle on what it actually says (or alternatively: reading into it what they want to see). 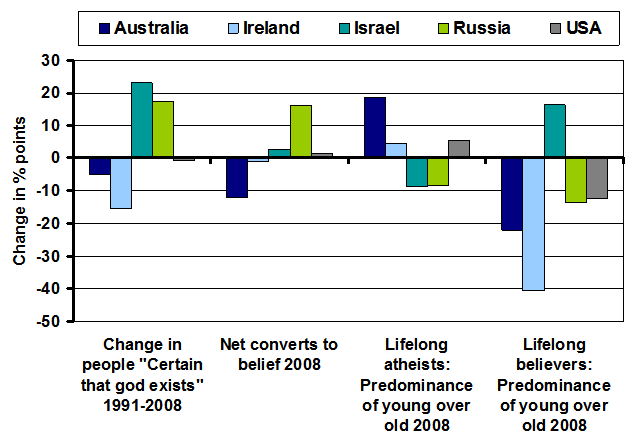 So what is this report anyway? Well, Tom Smith (University of Chicago) has analysed the latest religion survey from the International Social Survey Programme (done in 2008) and compared it with similar surveys done in 1998 and 1991.

Now this survey mostly looks at Europe, which has become less religious over that time. But there’s only a few non-European countries, so it doesn’t tell us much about the rest of the world. China, India, Nigeria, Egypt, Brazil – none of these major countries are included.

But it does tell us some interesting things about why different countries are heading in different directions. Take a look at the graphic, where I’ve picked out a few interesting cases.

Starting on the left, you can see that Australia and Ireland now have fewer people who are certain that god exists, Israel and Russia have more, while the USA has pretty much held constant.

So take a look at the next panel. This shows how many people said “I believe in God now, but I didn’t use to.”
minus those who said “I don’t believe in God now, but I used to”. In Australia, more people have converted to atheism, whereas in Russia, more people have converted to belief. Overall, there does not seem to be much net conversion in the other countries.

Now take a look at the next panel. This illustrates the ages of people who say that they have always been an atheist. In Australia and Ireland, they tend to be younger. What this shows is that increasingly, people are being born into atheism as a result of conversion of previous generations (the absolute percentage points are small for Ireland, because there aren’t many atheists – but the trend is there).

Now look at people who say they are lifelong believers. In Australia and Ireland, they tend to be old. That supports the idea that the religious culture is becoming a thing of the past.

In Israel, however, you see the opposite effect. There, lifelong atheists are older, and lifelong believers are younger – even though there is little net conversion. It seems likely that this is happening because of the high birth rates among orthodox Jews in Israel.

The USA basically follows the pattern of Australia and Ireland (and Europe), and so I think the future for the USA is in the same direction as these countries.

Russia, however, is showing an upsurge in religion due to conversion over the 20 years since the collapse of communism. Lifelong atheists and lifelong believers both tend to be older, reflecting the state of flux in this country as people dabble with different life stances.

Interestingly, the other ex-communist nations surveyed show different trends. Although there tends to be net conversion to religion (except the Czech republic), East European countries tend to have a preponderance of older lifelong believers and younger lifelong atheist – so a non-religious future seems likely for these countries.

But overall, I think what we are seeing here is a balancing out. Non-religious countries are becoming more religious, while religious Europe is becoming less religious. Israel, meanwhile, is going its own way!

May 8, 2012 Non-religious more likely to donate their bodies to science and organs to other people
Recent Comments
0 | Leave a Comment
Browse Our Archives
get the latest from
Nonreligious
Sign up for our newsletter
POPULAR AT PATHEOS Nonreligious
1

Defending the Hallucination Theory - Part 8: Too...
WHERE WE ARE In Chapter 8 of his Handbook of Christian Apologetics...
view all Nonreligious blogs
What Are Your Thoughts?leave a comment
Copyright 2008-2021, Patheos. All rights reserved.