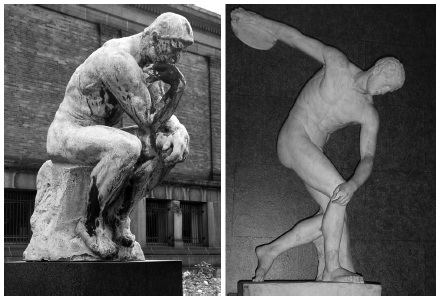 Surprisingly, according to a new study by Will Gervais and Ara Norenzayan at the University of British Columbia in Canada,simply changing the font used to write the questions (to make them more difficult to read) can actually make you more likely to answer ‘No’.

The explanation, they think, is that when the text is hard to read, we have to concentrate harder. We step our analytical brain up a gear, and quash our instinctive reactions.

In fact this effect, known as cognitive disfluency, has been shown in other studies to trigger analytic thinking strategies.

There’s good reason to think that triggering analytic thinking might reduce religious belief. Two recent studies (one last year and one last week)  have shown that people who are stronger in analytical thinking are also less likely to believe in god – even after controlling for basic intelligence.

But what’s new in Gervais and Norenzayan’s study is that they showed that you can manipulate this. They found that subtly encouraging people (well, Canadian students) to think critically also encourages disbelief.

For example, showing them a picture of Rodin’s “The Thinker” (on the left) versus one of Discobolus, reduced reported belief in God by around one third.

Doing a word puzzle which featured words like “analyze”, “reason”, “ponder”, and “think” had a similar, although somewhat smaller, effect (reducing belief in supernatural agents and also reported religiosity by around 20%).

And, in the font study, they found that simply using a greyed out, italic font was enough to have the same effect. Students who were made to read the questionnaire in a difficult font were around 20% less likely to report belief in God, the Devil, and angels.

So, has anyone else noticed that newspapers are a lot easier to read than they were at the beginning of last century? I wonder what effect that has had!

April 28, 2012
Are secular alternatives to religious gatherings any good?
Next Post

May 4, 2012 International religion league tables - who's up, who's down? And why.
Recent Comments
0 | Leave a Comment
Browse Our Archives
get the latest from
Nonreligious
Sign up for our newsletter
POPULAR AT PATHEOS Nonreligious
1