Instinctive thinkers more likely to believe in a personal god – and less likely to be atheists April 24, 2012 Epiphenom

Late last year some fascinating research revealed that people who take a more deliberative approach to problem solving – rather than just going with their instincts – are also less religious. Now some independent research not only confirms those findings, but also extends them to show how there is a progressive link between thinking style and decreasing religious beliefs.

Gordon Pennycook, at the University of Waterloo in Ontario, Canada, ran the test on 267 people from around the world (mostly North America and the UK) . The basic set up was the same as the previous study.

They gave people a series of three questions, which each had an intuitive, wrong answer. To get the correct answer, you typically need to think around the problem a little. 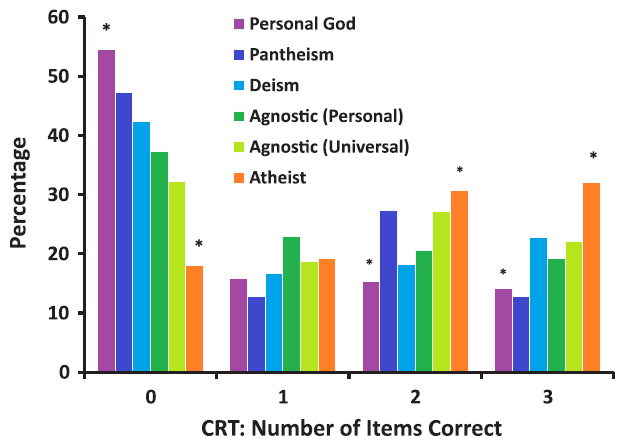 The key results are shown in the figure. People who believe in a personal god are disproportionately likely to have got every question wrong.

They also measured paranormal beliefs, and found that although these were broadly correlated with religious beliefs, many people are believers in either one or the other. Yet paranormal belief was also lower in people who got more questions right.

Both of these effects – on religion and paranormal beliefs – held even after controlling for factors such as age, sex, education and IQ.

In other words, conventional intelligence (problem solving, understanding words) was less important than having a considered, deliberative approach to problem solving.

Now, you may interpret this as evidence that religious ideas are intuitive, but Pennycook disagrees. He suggests that the problem is that many religious ideas are actually counterintuitive. Deep thinkers maybe don’t take these ideas at face value, and so are more likely to dig into the problem and so come to a different conclusion.

April 20, 2012
Religion facilitates learning about omniscience – but it still has to be learned
Next Post