Deep thinkers are more likely to lose their faith

There’s always a fair amount of interest in whether atheists are more intelligent than believers. When I’ve reported on this in the past, I’ve always been a little sceptical about whether the purported statistical association is meaningful or even real. SO here’s a couple of studies that shed an intriguing light on the problem.

The first by psychologists Gary Lewis, Stuart Ritchie, and Timothy Bates at the University of Edinburgh in Scotland has provided some of the most rigorous evidence to date that the link is indeed real. They took data from the large MacArthur Foundation Survey of Midlife Development in the United States and found that high IQ was significantly associated with every one of six different measures of religion.

For the most part, this association still held even after adjusting for factors like education, sex, age and even personality – the only exception with spirituality, the weakest of all indicators of religion. Overall, link between religion and IQ was strongest for the ‘fundamentalism’ measure.

The authors point out that the effect is very small. And what’s more, there’s still no reason to suppose that atheists are less religious because of their intelligence. There might be some other factor that they didn’t account for that’s related to both.

And that’s where the second new analysis comes in. Led by Amitai Shenhav, a psychologist at Harvard University, the team looked at cognitive style. Basically, they were interested in whether people make snap decisions based on their gut feelings, or whether they ponder things a bit more deeply.

The intuitive answer (10 cents) is the wrong one. Stop and think about it for a while and you’ll figure it out! You’ll probably take less time than I did… 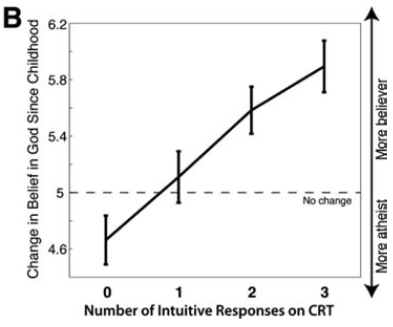 Anyway, it turned out that intuitive thinkers (who get the wrong answer) are more likely to believe in god and immortal souls. Even more intriguingly, deep-thinkers were also more likely to say that they had lost their belief since childhood.

That seems to fit with other research showing that believers in the paranormal seem to have a bunch of faulty, intuitive beliefs about how the world works.

But maybe you’re thinking this isn’t really about IQ? Maybe the religious just couldn’t figure out the right answers (it took me quite a lot of puzzling before I figured that example question out).

Well, in one study they did measure IQ, and IQ was indeed correlated with ‘thinking style’ test scores. That means that cleverer people were more likely to get the answer right.

However, even after adjusting for their higher IQ, deep-thinkers were still more likely to be atheists, and to have lost their childhood religion.

Now, you can probably invent explanations for that just as well as anyone. But one implication, it seems to me, is that this might help to explain the apparent link between atheism and IQ.

You see, if cognitive style and IQ are linked, then it might be that IQ is an innocent bystander here – a case of guilt by association. How you think, and whether you take the time to ponder things through, might be all that matters.

October 4, 2011 Supernatural explanations just don't occur to kids - they need to be taught them
Recent Comments
0 | Leave a Comment
Browse Our Archives
Related posts from Epiphenom