Distrust of atheists is reduced if people have confidence in law and order May 16, 2012 Epiphenom

If you read this blog regularly, you’ll have come across work by Will Gervais and Ara Norenzayan, at the University of British Columbia in Canada. Previously, they’ve shown that atheists in North America are are disliked because they are distrusted, and that untrustworthy people are often assumed to be atheists.

In new research, they’ve shown that the distrust that religious people have of atheists can at least partly be eased by subtly persuading them that the police are effective in stopping crime. 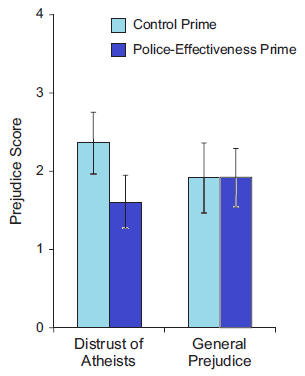 For example, in the study shown in the graphic, they showed students a video about police effectiveness and then, in a follow up survey, asked how distrustful they were of atheists and whether they disliked gays, Muslims or Jews. After they watched the video, their distrust of atheists dropped away.

Their prejudice towards other didn’t change, however. In other studies, they also showed that distrust of gays was also not improved by this kind of manipulation, suggesting that it was specifically distrust of atheists that was being affected.

So this suggests that while religious people think that belief in god makes a person trustworthy, they’re also open to the idea that secular authorities can also be a source of order and safety.

This puts me in mind of some other research by Aaron Kay and colleagues at the University of Waterloo in Ontario, Canada. They showed that, by pumping up belief that the government is in control, the desire to believe in a controlling god is weakened.

All more good evidence that one important factor that draws people to belief in God is fear and anxiety, and that stable social systems that are common in wealthy countries are contributing to the increasing numbers of non-believers.

May 13, 2012
Jesus shares your political views - but is more extreme
Next Post

May 21, 2012 For less-religious Americans, compassion is a significant factor in prosocial behaviour
Recent Comments
0 | Leave a Comment
Browse Our Archives
get the latest from
Nonreligious
Sign up for our newsletter
POPULAR AT PATHEOS Nonreligious
1