Why are atheists so disliked?

Why are atheists so disliked? September 2, 2009 Epiphenom

Bruce Hood has a post up about the atheist bus ad controversy in the US state of Iowa (OK, it was a couple of weeks ago, but I’ve been away…). What caught my eye was a comment by Konrad:

The thing that got me was the governor of the state saying that he found the ad disturbing. Clearly, people seem to treat religious adherence as symbolic of group identity so that they find the idea of atheists in their midst as threatening as that of enemy spies.

The hostile reaction to what was a pretty innocuous ad certainly is extraordinary. But is group identity – and the distrust of non-group members, really the cause of it?

Some intriguing hints come in a masters thesis by Will Gervais, a student at the University of British Columbia (I took it with me on vacation for some pool-side reading!). In it he describes a series of three experiments in anti-atheist prejudice among fellow students.

The first was an implicit association task. What this found is that religious people have a fairly deep-seated conception of atheists as unpleasant and untrustworthy – but it was the lack of trust that came through strongest. 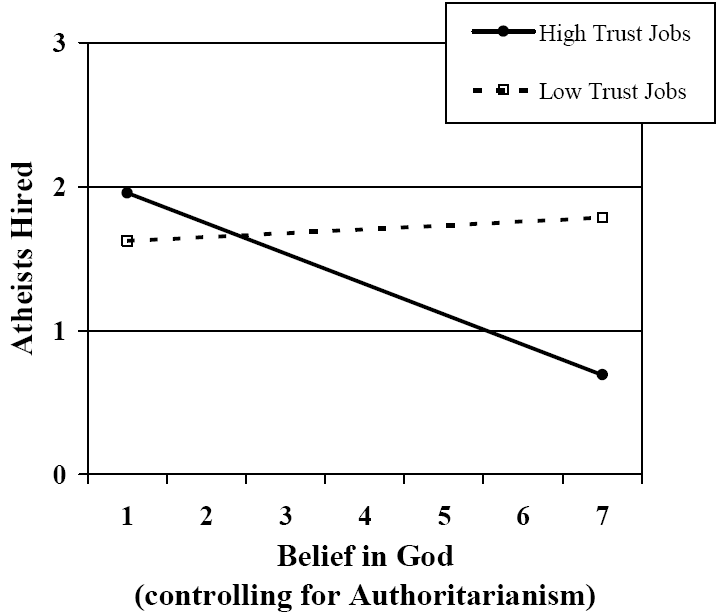 The second explored the idea of trust further, by exploring how religiosity affects willingness to hire atheists.

These two experiments show that the primary driver for religious hostility to atheists is specifically a lack of trust, rather than a belief that they’re more generally unpleasant. But it doesn’t explain why they have this level of distrust.

It could be in-group favouritism. Trust is the classic victim of group divisions, and so if the religious see atheists as an alien group then you would expect them to be distrustful.

However, Gervais argues that this might not be the whole story, for several reasons. Firstly, there was no evidence that atheists distrusted the religious, which you would expect if this were a standard case of distrust between groups.

Also, it’s not at all clear that ‘atheists’ are seen to be a group. Although the ‘religious’ are also highly diverse, by and large they all subscribe to some doctrine that defines them as group members (of one religion or another). Atheists, by definition, have no such common ground that make them an identifiable group.

What’s more, open atheists are a tiny minority in North America. Normally, between-group hostility is proportional to the size of the group. The hostility towards atheists seems to be, quite literally, out of all proportion.

It might be that distrust of atheists is driven, or at least augmented, by fears that non-belief in a punishing god will lead atheists to behave dishonestly. That’s certainly what a lot of evangelical Christians believe (and cognitive psychologists, for that matter).

But what about the third experiment? Here’s where it gets rather interesting. In the third experiment, Gervais gave the subjects one of three passages to read and react to – one on food, an excerpt from The God Delusion in which Dawkins argues that belief is nonsensical, and a passage detailing the increasing numbers of atheists in the USA in recent decades. This last passage included the crucial fact that at least 20% of Americans aged 18-25 are atheists. 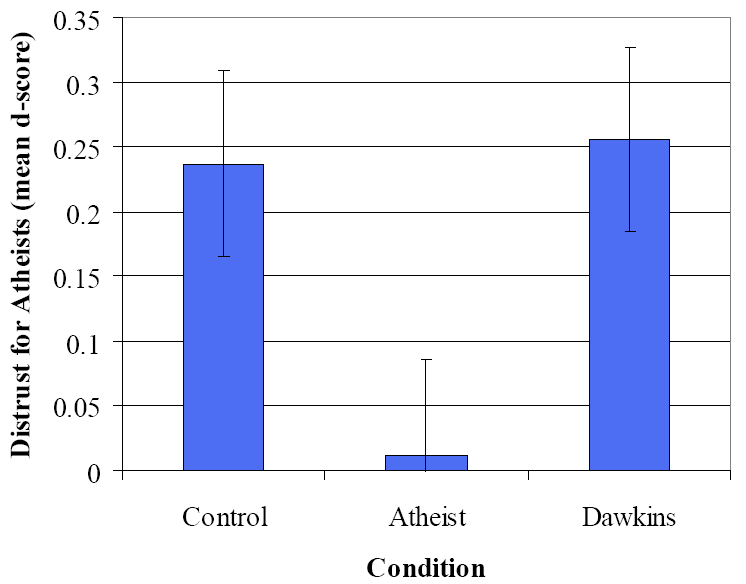 For the religious, reading that atheism was rather more common than they previously believed had a remarkable effect. It effectively abolished their distrust of atheists.

To me, this result strongly suggests that distrust of atheists is mostly due to fear of ‘others’. It suggests that the main reason for the distrust is that the subjects had not realised that many of their fellow students were, in fact, atheists.

Once they learned that atheists were not a weird, alien group, but rather people just like them, they felt able to trust them. And I think this conclusion is supported by the experience of atheists in places like the UK, where overt atheism is much more prevalent and distrust of atheists is correspondingly lower.

There are two lessons here. First, it suggest that theories that religion evolved as a tool to enforce in-group trust may be wrong.

Second, it suggests that all those bus ads may well be serving a useful function, even if they’re unlikely to convert anyone. If they normalise atheism, then they should also help to change the lot of atheists in the USA from social pariahs to trusted community members.

August 23, 2009
Is the Social Function of Religion Changing?
Next Post